'Title IX not only changed my life, but literally saved my life'

As a member of the Kent State Field Hockey team in the early 1980s. Patrice Salmeri remembers the impact Title IX made on her and her teammates.

"Title IX opened up a whole new world for me," Salmeri recalled. "So many 'No's' turned to 'Yes's. So many more opportunities to play sports. Title IX not only changed my life, but literally saved my life."

Salmeri will join more than 30 fellow student-athletes who will marshal the homecoming parade and attend other activities as part of homecoming weekend.

Kent State is honoring and commemorating the 50th anniversary of Title IX legislation with a year-long celebration, highlighting the success and impact of women's athletics at Kent State University.

Title IX of the Education Amendments of 1972 is a federal law that prohibits discrimination on the basis of sex in education programs or activities operated by recipients of federal financial assistance (such as Kent State). The Title IX law requires that no person in the United States, on the basis of sex, be excluded from participation in, be denied the benefits of or be subjected to discrimination under any education program or activity receiving federal financial assistance. Prohibited conduct includes any form of gender-based discrimination defined as sexual harassment, sexual assault, domestic violence, dating violence or stalking. Title IX's sexual harassment prohibitions apply to all students, faculty, staff and visitors.

Kent State Today reached out to the student-athletes who are taking part in the parade to reflect on the milestone. Many recall that the positive changes created by Title IX took time to implement.

"Title IX gave me more athletic opportunities in high school and college, but male and female teams were not quite treated equally yet.  Where it really affected me is my daughter had many more opportunities than I did and equal access to facilities,  transportation, and practice schedules.  Her teams were not treated as second-class citizens."

"Although we still have a way to go, Title IX means equal access to facilities, scholarships and education. As society ebbs and flows, it’s important to have safeguards such as Title IX in place." 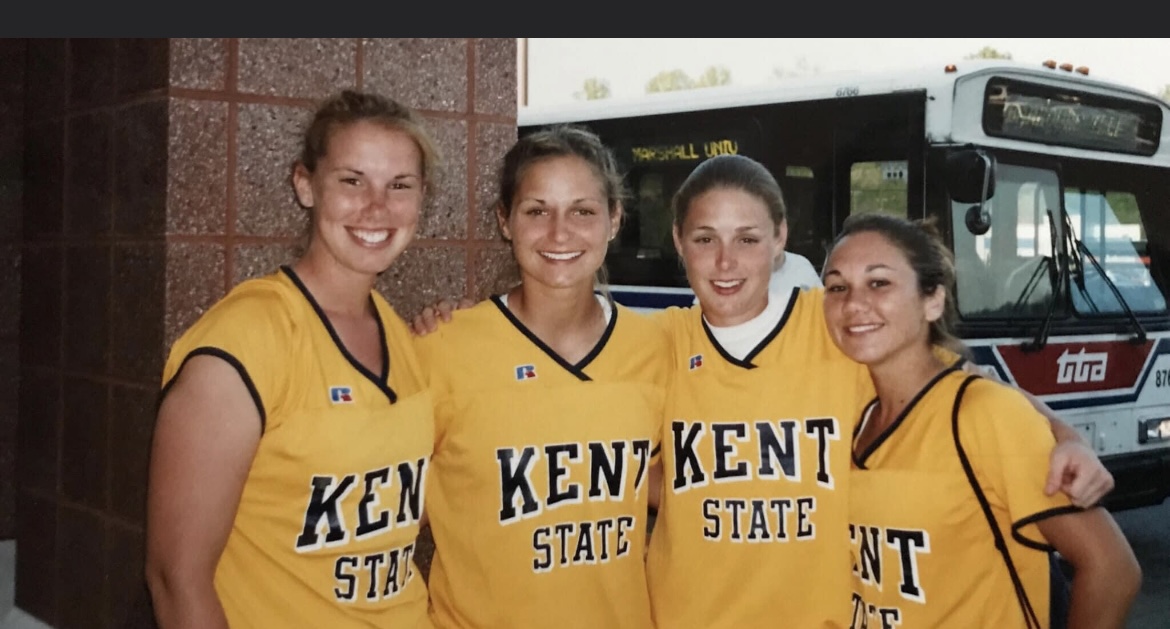 "I am beyond thrilled about the activities that Kent State has prepared to honor Title IX's anniversary and women in sports. This event is vital in acknowledging and celebrating the progress made in women's athletics over the last five decades. Participating in Kent  State's Title IX events is meaningful to me as it gives me the opportunity to stand in solidarity with past, present, and future female athletes.  It allows us to honor the trailblazers that helped lead the way."

"Because of the opportunities provided by Title IX, I was able to live my dream and pitch at the collegiate level.  We practiced and played in great facilities, and we had fantastic academic support as we worked to earn our degrees.  Off of the field, my teammates became friends for life.  I am so thankful that softball brought us together, which might not have been possible without the passage of Title IX." 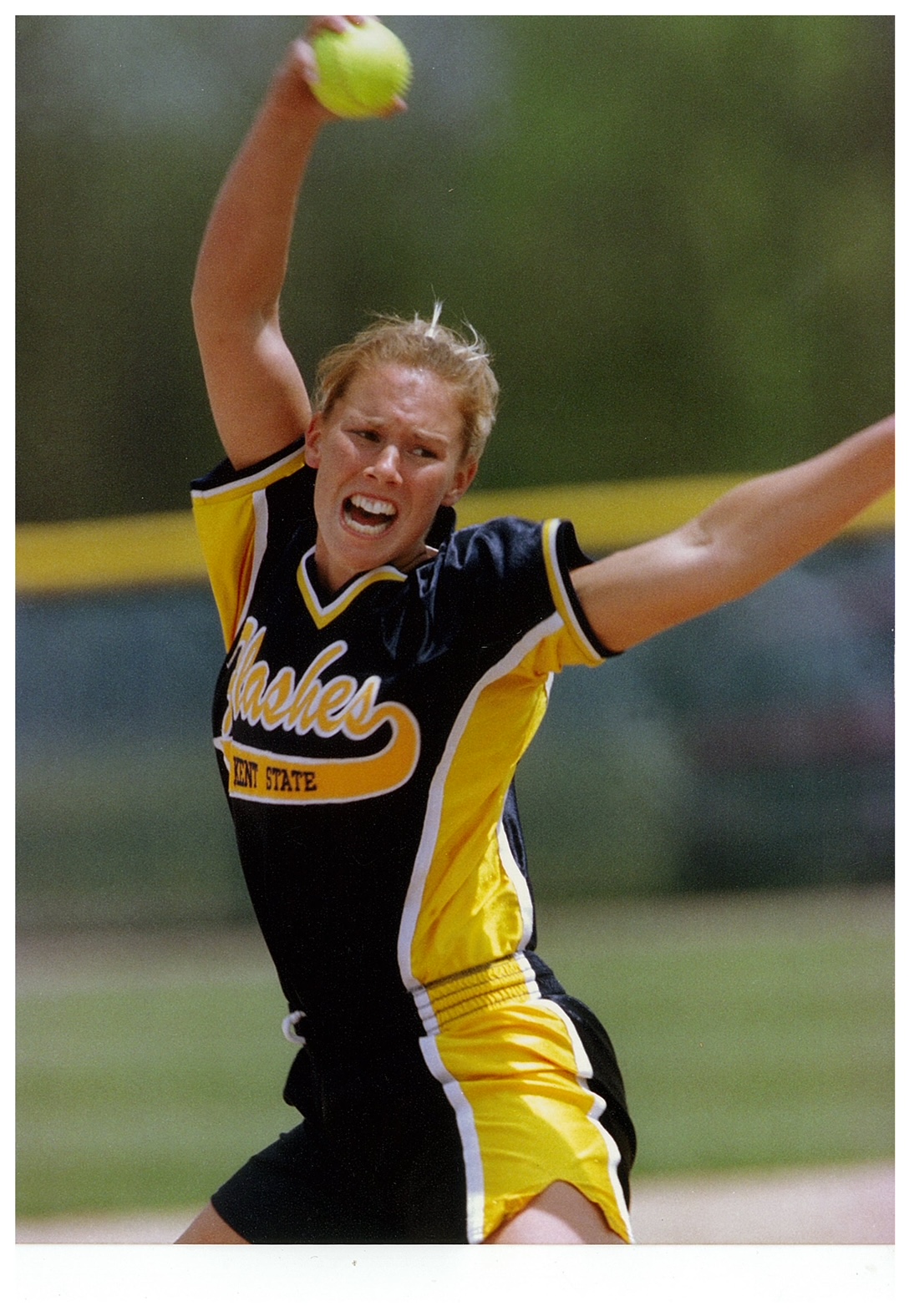 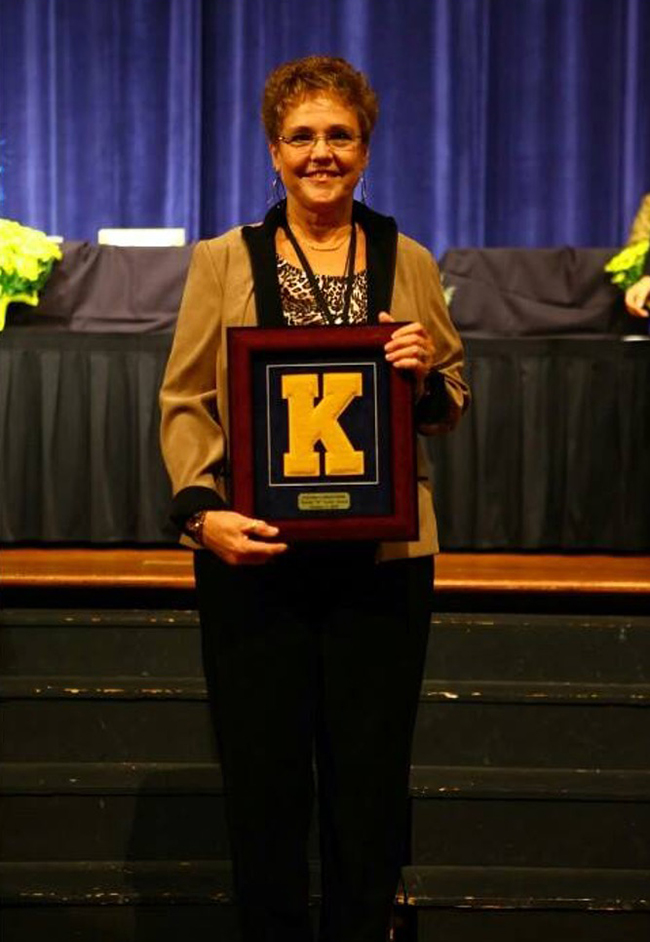 "Title IX was so important for women because obviously we were being left out of everything from varsity sports to the classroom.  Our class didn't really benefit from it because I don't think it went into full effect until 1976.

"The boys' teams went to games in buses, we had to find cars and pile in with no locker rooms, no scholarships and barely any uniforms. We did it for the love of the game. Judy Devine was our coach and let me tell you she was a GIANT inspiration in my life. I met her when she was a Ph.D. student, and she taught me about nutrition and losing weight effectively and safely.

"I was walking across the commons one day when I saw a group of women playing field hockey so I wandered over as a freshman and asked her if this was an organized team.  The field was not in particularly good shape, but that was all she had so she used it, and of course she invited me to play. I had played for years so was thrilled to have found a team at KSU.

'There were no stats, or numbers kept and we certainly didn't get Letters. Forty years later, we were honored at a sports banquet with our Varsity "K"'s, one of the proudest moments of my life!

"The University was not particularly helpful in girls sports, and we were called names and had our sexuality questioned, just because we played sports. Title IX allowed females like me to play not only equally but allowed females with little money to attend college with scholarships. This was radical and unthinkable! And now because of Title IX my daughter and my two grandchildren play sports, equally with the boys and have the same opportunities."

"We were MAC champs as I recall, but were never given the advantages the men's sports were given, so I was delighted when Title IX passed. We did not receive Athletic Letters at the time, (rectified later.) When we traveled to conference swim meets at 'away' competitions, we were allowed to wear the Jr. Varsity men's swim team warm-up jackets.  We never received our own gear, but I was so proud to wear the KSU jacket, even though we were on the varsity team.

"Another thing I remember is the traveling arrangements. When we stayed in a hotel, it was four girls to a room. The male sports teams put only two athletes in a room.  This was not a size thing, it was a money thing. Also, we practiced in the old pool, and even though our season was the Fall and the men's season was the Spring, somehow they got the new pool for their off-season practice.  Just the way it was.

"My experiences as an athlete were awesome. I relish the memories, but the times were not fair for women's sports.   I recall we had one shirt that said 'Put a Tiger in your Tank Suit,' KSU women's swim team.  We bought them ourselves. That was my only memorabilia, as we had to turn in our swimsuits at the end of the season."

"My collegiate playing experience was initially under the national oversight of AIAW then to the NCAA where Title IX's letter of the law was now 'black and white' but often carried out in 'gray terms' thus making the reality of achieving equity a hit or miss for women across all aspects of the campus community.

"Once I took the helm as coach, Title IX at KSU had advanced where women coached only one sport, offered a few partial scholarships, and had an actual team budget. Yet, there remained several areas where Title IX equity was questionable and, I questioned...a lot.

"Under the leadership of then President Cartwight, she listened, observed and investigated Title IX equity in KSU intercollegiate sports resulting in changes and leadership appointments. She hired Laing Kennedy who along with Judy Devine (my Field Hockey Coach and mentor to this day) brought Field Hockey and other women's sports and some men's sports into compliance. During this transition and after nine years coaching at KSU, I wanted to pursue my doctoral degree and accepted a Graduate Assistantship in 1994 at Arizona State University.

"At KSU, I competed with teammates who played for the love of the sport since only a few players had funding and many of us worked part-time. Our uniforms were old and sometimes shared between us. We bought our own shoes and sticks, and it was common to play three to four games in one weekend.

"During my coaching tenure, I worked with highly talented women athletes who were awarded KSU athletic and academic scholarships - many of whom won conference and national athletic and academic honors and several athletes who are now in the KSU Athletic Hall of Fame. Coaching at KSU remains the pinnacle of my 35 years working in higher education where I also have served as an administrator and as college faculty. I am a Forever Flash!" 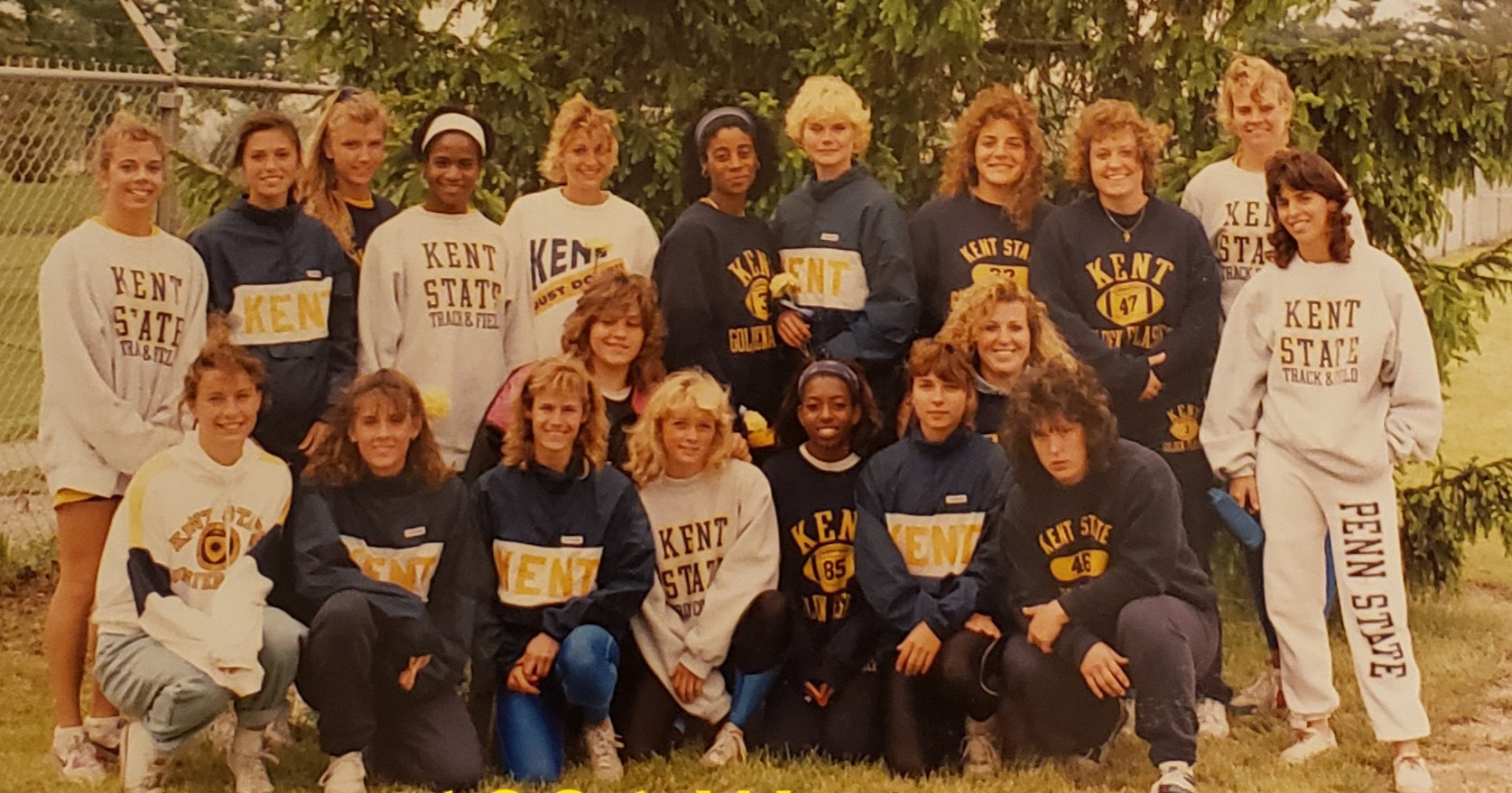 "Title IX created not only athletic opportunities for women to compete but also the means to earn athletic scholarships. I was fortunate to have earned an athletic scholarship all four years while attending Kent State University. This was the main reason I was able to attend college as my parents did not have the financial means to fund a college education. I fondly look back on my four years at Kent State as the best four years of my life, the memories and friendships made with teammates will last a lifetime. Thank you, Flashes Forever!!!"

"Be that as it may, I and my fellow women swimmers enjoyed having a great winning record, being competitive, building friendships, and overall participating in a wonderful sport. At Kent, during the years after Title IX was instituted, women were on the swim team until it disbanded in the '87-'88 year. The Kent State Women's Swim Team was important to many of us prior to and after Title IX.  We happily became Kent State letter winners in 2010." 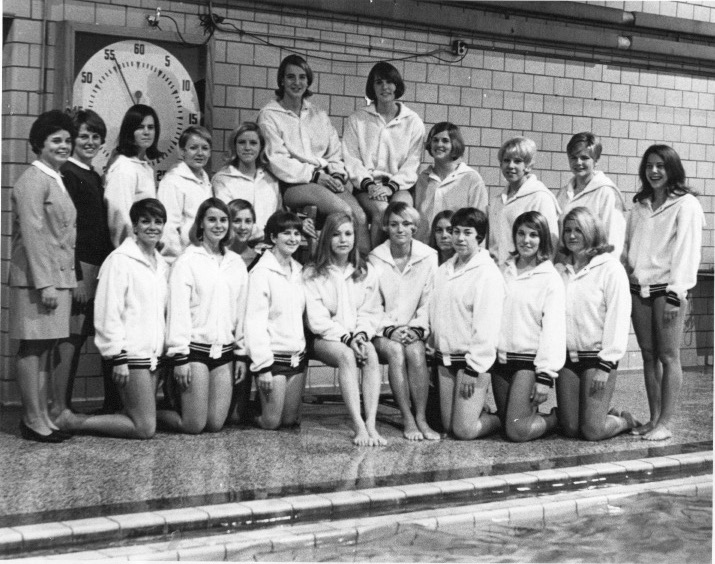 "Because of the great coaches we had at Kent, we were able to participate in sports!  I played Volleyball, basketball and a season of tennis.  Title IX had a tremendous (impact) on my career."

"For me, I had played three sports in high school and wondered if I might find the same competition and camaraderie in college.  I got up the courage to call the KSU athletics office to see if they might let me try out for the field hockey team.  I played sports at a small high school (Woodridge in Peninsula) - I wasn’t sure if I would be good enough. The person in the office said I could come to an upcoming practice, which I did.  What a great decision for me!

"I had great coaching, Ms. Devine, and I played with many great women!  In my sophomore year, KSU began offering scholarships. I was blessed for this financial support my last two years of college - thanks to Title IX.

"The experience I was given by Title IX shaped so much of my career and life." 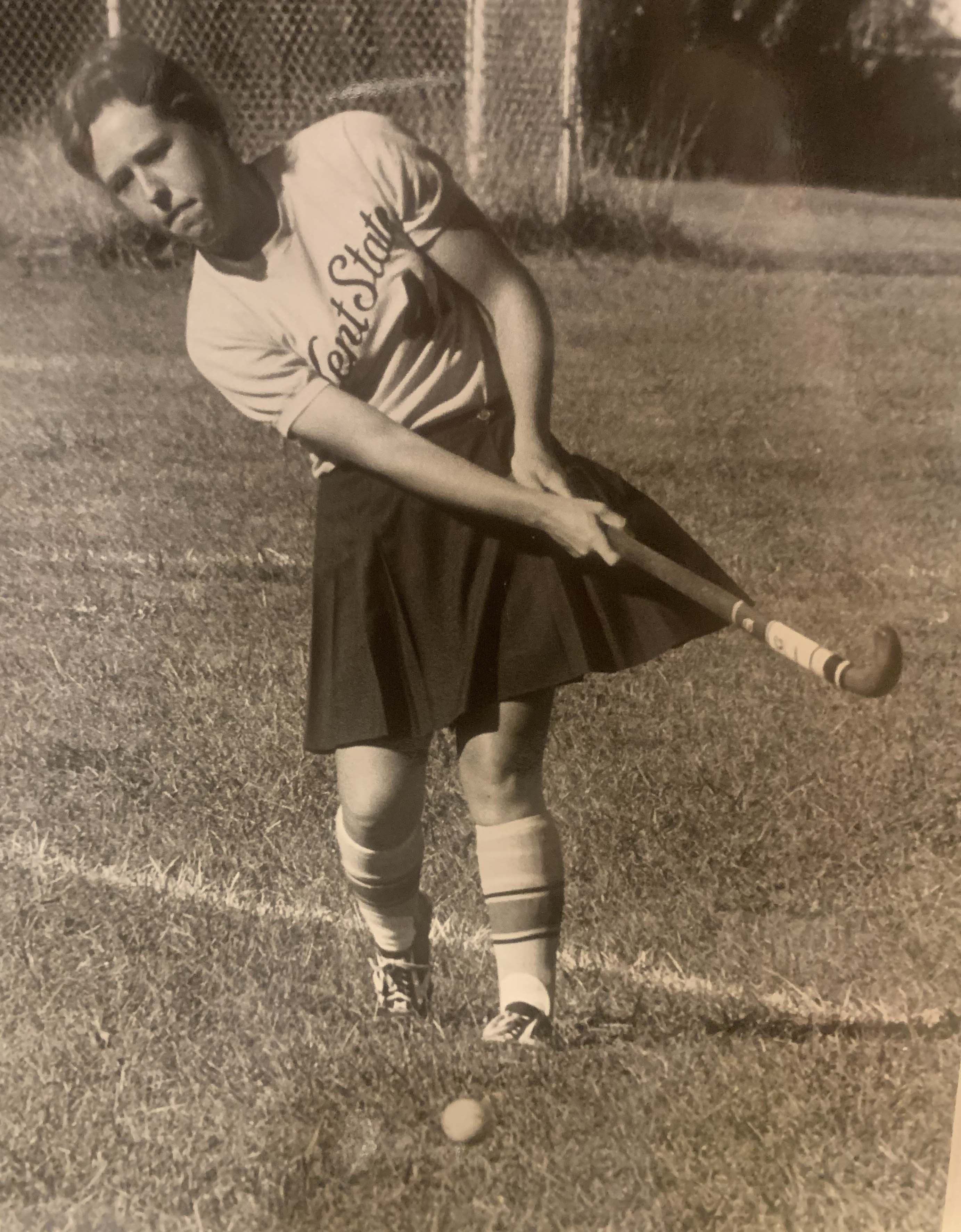 "Title IX opened up the opportunity for me to swim competitively at KSU.  We traveled as a team locally and internationally to represent the Women’s Golden Flashes in the early 1970’s. Forty years later we received our letter K in sports. So honored.

"Sports teams were a major part of my college experience and the games were loud, electric and filled with pride. Golden Flashes everywhere!  Swimming became my obsession, and the KSU ladies team encouraged new members. Swim meets took us regionally and into Canada to compete. Women's sports were not recognized until Title IX passed on June 23, 1972, for gender equity in education.  Amazing that some 40 years later, KSU women were honored with a 'K' sports letter sent to our homes.  An official Flash at last!"

Kent State Athletics is continuing with a year-long celebration, highlighting the success and impact of women's athletics.