The search for Kent State University’s 12th president became official today (May 14, 2013) when the university’s Board of Trustees named Trustee and Kent State alumnus Richard H. Marsh to serve as chair of a broad-based presidential search committee.

The search for Kent State University’s 12th president became official today (May 14, 2013) when the university’s Board of Trustees named Trustee and Kent State alumnus Richard H. Marsh to serve as chair of a broad-based presidential search committee. President Lester A. Lefton announced last month that he will retire effective July 1, 2014, giving the Board and the university community ample time to conduct a national search for his successor. 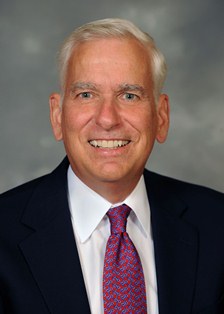 “It’s a privilege to lead the committee in search of the university’s next president,” Marsh said. “I’m honored to serve my alma mater, which has a long history of strong, visionary leaders. I look forward to working with others who are just as committed to a thorough and successful search.”

The members of the search committee will be announced later this summer. University policy stipulates that presidential search committees comprise faculty members, including the chair of the Faculty Senate and a faculty member at one of university’s Regional Campuses; Trustees; members of the administration, including an academic dean; an undergraduate student and a graduate student; an alumnus or alumna; and others the Board may deem necessary.

Marsh was appointed to the Board by Gov. John Kasich for a nine-year term that began July 27, 2011, and extends through May 16, 2020. He retired in 2009 as senior vice president and chief financial officer of FirstEnergy Corp after 29 years with the company. He is a Chartered Financial Analyst and also holds a Certificate in Management Accounting.

Marsh is immediate past chair of the Summa Health System Board of Directors. In addition, he is a board member of the Kent State University Foundation and the Sisler McFawn Foundation. In addition to his Kent State bachelor’s degree, he earned Master of Arts and Master of Business Administration degrees from the University of Akron.

What will tomorrow’s hospitals, clinics and doctor’s offices be like? How can their design improve the experience of patients and practitioners? Graduates of a new Kent State program will play key roles in answering those critical questions.

The university’s Board of Trustees today created Ohio’s first and only master’s program in healthcare design. The program, which will be offered by the university’s nationally respected College of Architecture and Environmental Design starting fall semester 2013, will prepare architects, interior designers and other accredited design professionals to specialize in the design of healthcare facilities.

The creation of the pioneering program drew on the expertise of faculty members and administrators from Kent State’s College of Architecture and Environmental Design, which offers the only accredited architecture program in Northeast Ohio; College of Public Health, which is one of just two public-health colleges in Ohio; and College of Nursing, which is the largest nursing program in Ohio. Faculty from all three colleges will provide instruction, focusing on ways that design can enhance patient care, support wellness and increase the efficiency of healthcare services. The program’s conceptualization and planning process also included practicing healthcare design firm principals from Akron, Cleveland and Pittsburgh.

Students not only will have the advantage of Kent State faculty expertise in architecture, public health and nursing, they will benefit from Kent State’s location in a region noted for high-quality, innovative medical education, research and practice. Northeast Ohio and Western Pennsylvania are home to a significant number of nationally prominent hospitals and healthcare facilities, and have many projects for new hospitals and other medical facilities underway or on the drawing board. With the healthcare industry a major economic driver in Ohio — and with the U.S. Bureau of Labor Statistics projecting strong job growth in both the public-health and architecture sectors over the coming decade — graduates of the new program will be in high demand regionally, statewide and nationwide.

The programs will be located in Kent State’s Cleveland Urban Design Collaborative in downtown Cleveland, where students will learn as they gain daily experience in an operating design practice.  Students also will have a number of opportunities to be involved in the research of the Kent State Cleveland Urban Design Collaborative faculty and staff, and will have the option of studying abroad at Kent State’s facility in Florence, Italy.