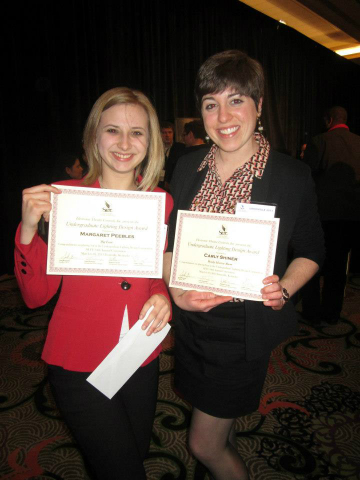 Senior theatre design major Carly Shiner, of Uniontown, Ohio, placed first in the Undergraduate Lighting Design category for her work on The Rocky Horror Show, held at Kent State in November 2012. She decided to enter the competition after viewing the entrants’ work from last year.

“This is a huge honor because it’s a national award for lighting design, and I won first place against many other talented undergraduate artists,” Shiner said. “It’s a confirmation of my dream.”

“The award was especially rewarding because I was entering a competition where most of the other participants were seniors in college, and they were entering their senior designs,” Peebles said. “My design was the only straight play to be selected to move on, and I was the only junior to be juried in my category.”

The Southeastern Theatre Conference is the largest regional theatre organization in the United States and provides year-round competitions, festivals, events, job opportunities, scholarships and awards for undergraduate and graduate students involved in the theatre industry.

“The students were among only four awards given from a field of entries from colleges and universities throughout the nation,” said Cynthia Stillings, director of Kent State’s School of Theatre and Dance. “We are so proud of our talented students and their work.”

Shiner said having two awards credited to Kent State is a well-deserved recognition for the School of Theatre and Dance. Her education at Kent State helped train her for this award in a number of ways, including preparing her to effectively present her art and communicating about her artistic choices.

“Kent State gave me the opportunity to be an artist,” Shiner said. “Thanks to the hands-on program and constant support from design and acting faculty alike, I was able to thrive and grow in a learning environment that functions like a professional theatre.”

Peebles agreed that Kent State helped her with this opportunity.

“The teaching at Kent State certainly got me to where I was in the competition,” Peebles said. “If not for my advisors and professors who give me shows, review my work and keep me organized, I would not have had a quality product to enter into the competition.”

The conference is an opportunity for young designers to have their work judged by big-name judges in their fields. This year, Tony Award-winning scenic designer Todd Rosenthal, and Broadway lighting designer Michael Lincoln judged the Southeastern Theatre Conference.

“It helps so much to have an outsider’s eye look at what you can do, and how you can improve,” Peebles said.

For more information about Kent State’s School of Theatre and Dance, visit www.theatre.kent.edu.

For more information about the Southeastern Theatre Conference, visit www.setc.org.