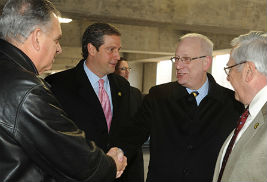 LaHood says he celebrates the vision of the Kent community and how “if you build it, they will come.”

“Congratulations, Kent,” LaHood says. “You have a lot to be proud of.”

LaHood’s prior visit to Kent was in July 2010 when he toured downtown Kent’s Acorn Alley and the future site of the Kent Central Gateway project. Afterward, a press conference was held outside the PARTA offices where Ryan and LaHood talked about the significance of the project that will help create a vibrant downtown and unite the city and Kent State. Ryan and LaHood acknowledged the three local project partners: Kent State, PARTA and the city of Kent.

In February 2010, Ryan announced that the Kent Central Gateway project had received a $20 million grant from LaHood’s agency through the Transportation Investment Generating Economic Recovery (TIGER) program, funded through the American Recovery and Reinvestment Act. The project serves as a catalyst for the revitalization and redevelopment of downtown Kent and reconnects the central business district with the Kent State campus.

Expected to be completed this summer, the multimodal transportation facility will combine elements of buses, pedestrians, bicycles and cars. It will serve as a transfer point that allows bus transport to Akron, Cleveland and all points in Portage County. Situated at Erie and Depeyster streets with a curb cut into Haymaker Parkway, the Kent Central Gateway project is estimated to stimulate $60 million worth of new investment, both public and private, in Kent and create more than 250 construction jobs during construction of the project. It is located next to the Kent State University Hotel and Conference Center, which is also under construction.

Back in February 2010 when the $20 million TIGER grant for the Kent Central Gateway was announced, Lefton said that this sets into motion all of the other development projects planned for downtown Kent, including the hotel and conference center. He also commented that the Kent Central Gateway project is “a huge, transformative event in the life of Kent, the university and Portage County.”