A Visit From the President

President Barack Obama visited the Kent Campus on Wednesday, Sept. 26, where he addressed students and supporters. 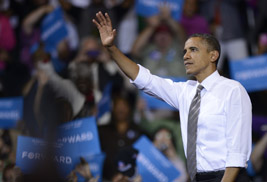 President Barack Obama visited the Kent Campus on Wednesday, Sept. 26, where he addressed students and supporters. It has been 100 years since a sitting president visited Kent State. The campus was buzzing with excitement after getting word Obama was coming to speak at the Memorial Athletic and Convocation Center (MAC Center).

“It is important that the city of Kent be recognized for all the work it has done downtown, and of course there are so many federal, state and local projects downtown that have all been matched by private dollars,” says Barb Hipsman, associate professor in the School of Journalism and Mass Communication. “It’s quite a coup for the university and for the city, and I think it’s just great for Kent State students. We haven’t had a sitting president come through here in quite a long time.”

The combination of a lengthy line – which wrapped around five buildings – and pouring rain didn’t hinder the crowd’s determination to see the president speak. Attendees started lining up the night before and some even slept in tents through a thunderstorm.

Sara Hutcheson, a senior communication studies major, says she wished it wasn’t raining, but she knew it was going to be worth it.

“It was pretty cool to see all these people still standing out here despite weather conditions and other obligations,” Hutcheson says.

The Undergraduate Student Government has been working hard to make it easier for students to register to vote for the upcoming presidential election.

“The last month has been intense,” says Jake Green, communications director for the College Democrats at Kent State. “We’ve been doing a huge voter registration push in which we managed to get almost 2,000 students registered, which is a big part of the reason why President Obama chose this campus to come to.” “Coming to a small town like this, if you’re a sitting president, is a big thing. I was excited to see the kids get excited,” Hipsman says.

Click here to see more photos from the event.

This article is not an endorsement by the university for any political party.