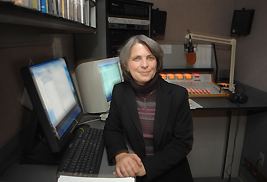 WKSU News Director M.L. Schultze was voted president-elect of the Ohio Associated Press Broadcasters (OAPB), even as WKSU station staffers were honored with seven OAPB awards, including four first-place prizes. The awards luncheon ceremony took place on June 3 at the Hilton Columbus at Easton. WKSU competes in the Large Market division with other commercial and non-commercial radio operations in major Ohio media markets, including Cleveland, Columbus, Cincinnati and the Ohio News Network.

Schultze will assume the role of Ohio Associated Press Broadcasters board president from current leader Tom Moore in June 2013. Board members are responsible for managing the group’s annual contest and awards luncheon, the scholarship competition and additional events, such as workshops. Schultze came to WKSU in July 2007 after 25 years at The Repository, where she was managing editor for nine years. While there, she covered schools, city government, crime, courts, politics and special projects. A native of the Philadelphia, Pa., area, Schultze graduated from Syracuse University with a degree in magazine journalism and political science in 1978. Schultze lives in Canton with her husband, Rick Senften, a Kent State journalism instructor and retired special projects editor at The Repository, and their son. Their daughter works in Washington, D.C.

Ohio Associated Press Broadcasters awards went to five individual staff members and one group effort. The full newsroom contributed to the first-place effort for Extraordinary Coverage of a Scheduled Event for a seven-part series of reports on the aftermath of the attacks on Sept. 11, 2011, ten years later. Stories included Vivian Goodman’s profile of the late Lilian Tyrrell and her controversial woven tapestry “Falling Man,” Amanda Rabinowitz’s examination of changes in rural life following 9/11, Kevin Niedermier’s report on the men who were in the air traffic control tower as the doomed Flight 93 flew into Cleveland airspace, Jeff St. Clair’s introduction of a woman who was married to a suspected al-Qaeda collaborator, Tim Rudell’s discussion with college students about the world-changing event, Kabir Bhatia’s investigation of the information – and misinformation – about Islam that has bubbled to the surface in the past decade and, Schultze’s conversation with Wendy Anderson, a local woman who went to New York to become an early responder.

A first-place award went to Schultze for Best Breaking News Coverage for “Stark County Seeks Shelter.” When Canton was struck by a debilitating ice storm, much of Stark County lost power – including Schultze’s family. Making lemonade from lemons, Schultze grabbed a portable recorder and interviewed people in the shelter who were at risk when the electricity went out.

St. Clair won two Ohio Associated Press Broadcasters awards for Exploradio. This new weekly series on science and technology in Northeast Ohio was recognized with a first-place award for Best Documentary or Series and a second-place award for Best Use of Sound for an installment focused on a composer who finds inspiration from sounds of nature.

The first-place Ohio Associated Press Broadcasters award for Best Enterprising Reporting went to Goodman for a three-part series examining the state of the Lesbian, Gay, Bisexual and Transgender (LGBTQ) community in Northeast Ohio. As the International Gay Games prepare to hold an event in Cleveland and Akron in 2014, Goodman asked: Just how gay-friendly is this region?

Second-place awards went to Rudell for Best Reporter in Ohio, and Rabinowitz in the Feature Reporting category for “Hard Hits on ‘Little Bobbleheads’.”