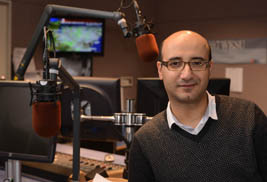 WKSU is hosting Tunisian Journalist Tarek M’Rad for 10 days while he covers the 2012 presidential election. M’Rad comes to WKSU through the International Center for Journalists.

“We have learned a lot from Tarek because he brings us an outsider’s perspective,” says M.L. Schultze, WKSU news director. “He brings the perspective of a journalist from a country that is preparing for its first presidential election – in some very uncertain times.”

M’Rad started pursuing his passion for the media by hosting the only foreign-language speaking radio in Tunisia, RTCI. In October 2010, M’Rad was the first voice heard on Express FM, the first business and news radio station in Tunisia.

M’Rad is now in charge of several economic and political debate shows on Express FM and is in charge of running the radio marketing department. He hosts programs about politics and economics, a “Success Story” program and one alternative music program.

“We actually love the Black Keys, and I know they come from Ohio,” says M’Rad.

M’Rad was chosen by the International Center for Journalists as the journalist who would represent Tunisia.

“I'm honored they have chosen me,” says M’Rad. “I didn’t choose Kent or Ohio, but when I understood the reality of swing states and the importance Ohio plays in election, I considered myself really lucky to be placed at WKSU.”

M’Rad is in America covering the election because this is the first year for a Tunisian presidential election.

“I hope to learn enough during these elections to have a benchmark and be able to assess the successful conduct of the first Tunisian presidential elections on March 20, 2013,” says M’Rad. “I hope American journalists would come to Tunisia as observers, too.”

M’Rad’s experiences in America have compelled the American journalists at WKSU to look at the election in a different light.

“The questions he asks us force us to examine what we really know about our own democratic system,” says Schultze.

And M’Rad has learned a lot about the democratic process and the American election process while he has been in Ohio.

“The speeches I attended at the Washington Press Foreign Center have already helped me understand the specificity of the American election process,” M’Rad says. “I'm discovering on the ground in Ohio that it's not always a fair game. I'm astonished at the fortunes spent on campaign advertising and the aggressiveness of their messages. But, despite the ruthless fight, I feel that both parties would finally accept the results whether it's in their favor or not, and I admire this democratic culture. We have a long road to go in Tunisia to settle democracy the American way.”