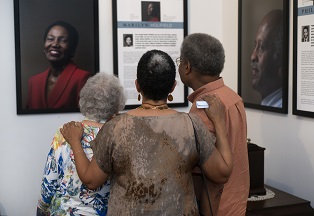 The exhibit “They Led the Way” chronicles the stories of eight students who desegregated the public schools in Tallahassee, Florida, in the 1960s. It premiered in September 2013 at the John G. Riley Center/Museum of African American History and Culture in Tallahassee. A duplicate exhibit was shown January through March 2014 at the Kent State School of Journalism and Mass Communication, where Schierhorn and LaBelle are faculty members.

“They Led the Way” was the only Florida exhibit to win an American Association for State and Local History merit award, but it is one of two award winners associated with Kent State. The university won an award for the May 4 Visitors Center exhibits.

“The winners represent the best in the field and provide leadership for the future of state and local history,” according to the American Association for State and Local History.

The association will present the award honoring Schierhorn, LaBelle and Riley Museum Director Althemese Barnes on Sept. 19 at its annual meeting in St. Paul, Minnesota.

Photo Caption:
Guests view the exhibition “They Led the Way” that tells the stories of the eight students who desegregated Leon County, Florida, public schools in the 1960s. (Photo credit: David LaBelle)