Iris E. Harvey, Kent State University’s vice president for university relations, is among the 2014 Women of Note and was recognized on July 24 at LaCentre of Westlake, Ohio. She is one of 15 women selected by Crain’s Cleveland Business for its 2014 class, honoring the women whose passion, dedication and strength led to success, not only for themselves, but their organization and colleagues as well. 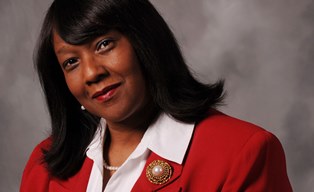 Harvey, a resident of Stow, Ohio, has been with Kent State since 2008 and oversees Kent State’s global branding initiatives and directs university communications, marketing and media relations, regional engagement and corporate affairs. Earlier this year, Harvey was honored at the 2014 Harold K. Stubbs Humanitarian Awards in Akron, Ohio. In 2013, she was selected by the J. William Fulbright Foreign Scholarship Board for a U.S.-France International Education Administrators Seminar award, and spent three weeks in France learning about other higher education systems.

“I’m proud to be honored and included in the company of such extraordinary women who are having a significant impact on their organizations, our communities and the state,” Harvey said.

Harvey earned her bachelor’s degree in marketing and Master of Business Administration in international marketing from the University of Southern California, as well as a graduate professional degree in higher education administration from the George Washington University. Before joining Kent State, Harvey held senior marketing positions in higher education at Wright State University and the University of Maryland University College; was the CEO of an international consulting firm she founded and operated in Japan for nearly a decade; and held a vice presidency position at Citigroup Global Consumer Bank Group.

For the past 15 years, Crain’s Cleveland Business has dedicated an issue to honor the region’s women of achievement and accomplishment with its Women of Note program. It also stages an event to honor them. WKSU was media sponsor for the event, and M.L. Schultze, WKSU producer and reporter, served as master of ceremonies.

To see the full list of this year’s Women of Note honorees, visit www.crainscleveland.com/section/WON_Honorees.