The National Collegiate Honors Council (NCHC) has named Allison Moats, a recent graduate of the Honors College and the College of Arts and Sciences at Kent State University, as a Portz Scholar for 2014. Allison is a native of Ravenna, Ohio, and received her bachelor’s degree from the Department of Anthropology. Each year, the Portz Prize recognizes outstanding undergraduate honors theses submitted by honors college students from across the country. 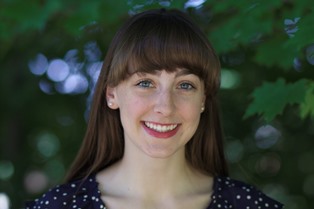 Honors programs throughout the country nominate one student essay to be considered by the NCHC Awards and Grants Committee. Moats is one of four student scholars selected this year for the Portz Prize nationwide, and she is the seventh Portz Scholar from Kent State. This year’s competition had 39 institutional nominees.

“I felt very privileged just to be the Portz Scholar nominee for Kent State University, but I am beyond honored to have been selected for the national award,” said Moats, who majored in biological anthropology with a minor in biology. “I am also very proud that I am able to represent Kent State at the NCHC National Conference in Denver as its first Portz Scholar since 2010.”

Her thesis, titled “Abnormalities in the Growth and Development of the Proximal Femur: Comparing Ancient to Modern Populations and Their Incidences of Slipped Capital Femoral Epiphysis and Cam Deformity,” compared the Libben Collection, an ancient population from 1,000 years ago, and the Hamann-Todd Osteological Collection, a modern population from the early 20th century. Her findings revealed differences between both populations based on environmental factors, such as diet and activity level.

“Every Honors College can nominate one person to be considered for the Portz Scholar award,” said Don Palmer, Ph.D., interim dean of Kent State’s Honors College. “This year, I read a number of honors theses, and I selected Allison’s as being the strongest and most competitive. I’m very pleased that she won because she is very deserving of this award. Her thesis was a very well-focused scientific problem, which she approached in a mature manner, and the quality of her work is first class.”

Moats credits her thesis advisor Linda Spurlock, Ph.D., Kent State assistant professor in the Department of Anthropology within the College of Arts and Sciences, for helping her select her research topic. Palmer also recognizes Spurlock as being one of Kent State’s outstanding faculty advisors of Honors College students.

“Allison’s research is excellent, and I believe she’ll be able to publish it,” Spurlock said. “Pediatric orthopedic surgeons will be interested in her findings. I’m thrilled that she won this award! She worked very hard and deserves it.”

James Blank, Ph.D., interim dean of Kent State’s College of Arts and Sciences, said, “We couldn’t be more pleased with Allison’s accomplishment. This is a prestigious honor. Allison epitomizes the characteristics that we cherish here in the College of Arts and Sciences. Her essay conveys the quality of not only the academic and research programs in anthropology here at Kent State, but also the outstanding support our students receive from faculty advisors like Linda Spurlock.”

Moats will receive her award and present her thesis at the 2014 National Conference of the National Collegiate Honors Council in Denver, Colorado, on Nov. 8.

“After earning my Ph.D., I plan to continue conducting research while teaching at a university,” Moats said.

Moats’ thesis can be viewed at http://rave.ohiolink.edu/etdc/view?acc_num=ksuhonors1399298410.

For more information about the National Collegiate Honors Council and the Portz Scholars program, visit http://nchchonors.org.

Photo Caption:
The National Collegiate Honors Council has named Allison Moats, a recent graduate of the Honors College and the College of Arts and Sciences at Kent State University, and a native of Ravenna, Ohio, as a Portz Scholar for 2014. (Photo credit: Wesley Moats)