The fall 2014 Bowman Breakfast will take place at Kent State University in the Kent Student Center Ballroom on Wednesday, Oct. 8. Doors open at 7 a.m., breakfast begins at 7:30 a.m., and the program will follow at 8 a.m. 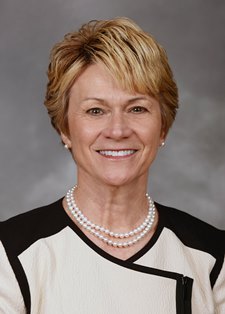 The cost to attend is $10 per person, payable by cash or check at the door only. Invoicing is not available for this event. Reservations can be completed online or by contacting Mary Mandalari at 330-672-8664 or mmandala@kent.edu no later than Wednesday, Oct. 1. No shows will be billed. If you find you cannot attend, please contact Mandalari to cancel your reservation by Oct. 1.

Warren became Kent State’s 12th president on July 1, 2014. As the university’s chief executive officer, Warren oversees one of the nation's largest university systems. Kent State’s eight campuses provide more than 300 academic programs to more than 41,000 undergraduate and graduate students from throughout Ohio and the nation, and from approximately 100 countries. One of the largest employers in Northeast Ohio, the university employs more than 5,700 full- and part-time faculty and staff.

Warren is an internationally respected and widely published scholar in the fields of education and exercise physiology. Her most recent research focused on urban education, including access and success for urban youth, the preparation of teachers for urban environments and coordination of education through P-20 initiatives. She is a Fellow of the American College of Sports Medicine and the Research Consortium of the American Alliance for Health, Physical Education, Recreation and Dance. She was elected to the Board of Trustees of the American College of Sports Medicine in 2004 and is a former president of its Southeast Chapter.

Kent State is committed to making its programs and activities accessible to those individuals with disabilities. If you or a member of your family will need an interpreter or any other accessibility accommodation to participate in this event, contact the university’s accessibility liaison, Jacqueline Gee, by phone at 330-672-8667, by video phone at 330-931-4441 or via email at accessKSU@kent.edu.