Beverly Warren, who today begins her presidency at Kent State University, wasted no time getting more familiar with her new university family and the community. The first morning for Kent State’s 12th president includes a walk through campus with her Cabinet, breakfast with city leaders, meetings and lunch with students, and the launch of her official Twitter account. 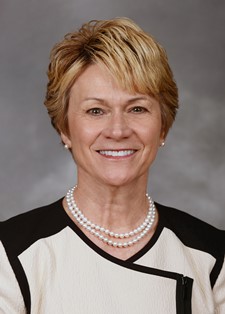 Warren began the day with an email to the Kent State community expressing her excitement of joining Kent State, sharing the values that will guide her work and discussing her approach to the “great privilege of being your president.” Warren’s email can be found here: www.kent.edu/news/success/welcome-president-warren. She held her first meeting with her Cabinet, the senior leadership of the university who report directly to her. Following the meeting, Warren and the Cabinet walked down the Lester A. Lefton Esplanade, named after Warren’s predecessor who retired, and met with city of Kent leaders at the esplanade arch. University and city leadership then had a breakfast meeting together at the Kent State University Hotel and Conference Center in downtown Kent, Ohio.

Also this morning, Warren is touring the campus, meeting with Kent State students and exploring the university. She will have lunch with students in the Hub, a popular dining location and commuter spot in the Kent Student Center, before traveling to Kent State University at Ashtabula. Her meeting with faculty, staff and community leaders of the Regional Campus will be replicated at all Kent State campuses and the communities they serve over her first few weeks.

Warren also announced today in her email to the Kent State community that she has a Twitter account. People can follow and connect with her @PresBWarren.

As the university’s chief executive officer, Warren now oversees one of the nation’s largest university systems. Kent State’s eight campuses provide more than 300 degree programs to about 42,000 undergraduate and graduate students from throughout Ohio and the nation, and from approximately 100 countries. One of the largest employers in Northeast Ohio, the university employs more than 5,700 full- and part-time faculty and staff.

Prior to coming to Kent State, Warren had served as provost and senior vice president at Virginia Commonwealth University since 2011.