Coco isn’t the only police dog on campus -- anymore. 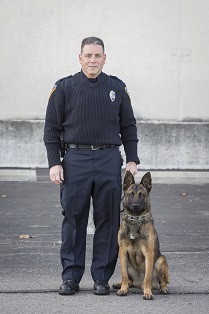 “We had a wonderful opportunity to bring another K-9 unit to Kent State,” said John Peach, Kent State’s director of public safety and chief of police. “The Ohio Department of Public Safety used a homeland security grant to fund Dexter’s training and all of his expenses during his service as a police dog.”

Dexter will partner with Officer Miguel H. Witt, who is a 14-year veteran of Kent State’s Police Services. Witt and Dexter have been training together in Columbus, Ohio, for seven hours a day for the past five weeks. They will be patrolling campus starting mid-November.

“It’s been an incredible journey learning how to work together as a team,” Witt said. “You have to learn how to read the dog and what he’s telling you to do.”

Kent State will hold a news conference with the Ohio Department of Public Safety to introduce Dexter to the Kent State community on Nov. 19 at 10 a.m. in the Kent Student Center Ballroom Balcony, which is located on the third floor of the student center. John Born, director of the Ohio Department of Public Safety, and Richard Baron, executive director of Ohio Homeland Security, will present Dexter to the university. All are welcome to attend. 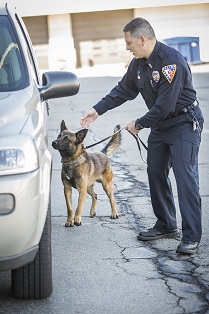 Peach said Dexter will be the third explosives detection dog in Portage County.

“Having Dexter provides a better ring of safety for neighboring communities who don’t have an explosives detection dog,” he said. “The primary focus is to keep the university safe, but there are multiple requests for our K-9 unit to help out elsewhere, whether it’s a sporting event or a large convention, like the Republican National Convention in Cleveland in 2016, which we have committed to assist.”

Media Note:
Members of the media and the general public are invited to attend the Nov. 19 event. If you are interested in attending, please contact Emily Vincent.