Congratulations to Our New Graduates

The university held its fall 2013 Commencement ceremonies for the Kent Campus on Dec. 13 and Dec. 14 at the Memorial Athletic and Convocation Center (MAC Center). 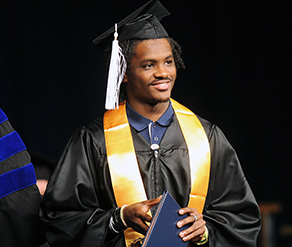 The 6 p.m. ceremony on Friday was for those receiving their master’s and doctoral degrees. The speaker for this ceremony was Melody Tankersley, Ph.D., Kent State’s associate provost for academic affairs and a professor in the College of Education, Health and Human Services. Her academic expertise is in the development and treatment of emotional and behavioral disorders of children and youth. Her research focus is on identifying and implementing evidence-based practices in schools and homes to prevent and respond to children’s behavioral disorders. Tankersley has secured around $2 million of funding and published more than 70 books, chapters and articles on her areas of focus. Her work has been recognized internationally. Most recently, she was awarded the James M. Kauffman Publication Award for a scholarly work that results in knowledge leading to exemplary practice. Tankersley currently serves on the executive board of the Council for Exceptional Children’s Division for Research and is on the editorial review committees of four top-tier journals.

The 9:30 a.m. ceremony on Saturday was for those receiving their bachelor’s degrees from the College of Applied Engineering, Sustainability and Technology; the College of the Arts; the College of Arts and Sciences; the College of Communication and Information; and the College of Public Health. The speaker for this ceremony was former NASA astronaut and Kent State alumnusCarl E. Walz, vice president for human space flight operations of Orbital Science Corporation’s Advanced Programs Group. Walz previously held several positions within NASA and had a distinguished career as an astronaut. He is a veteran of four space flights, logging a total of 231 days in space. In addition to his NASA service as an astronaut, Walz served as the director for the Advanced Capabilities Division in the Exploration Systems Mission Directorate at NASA headquarters in Washington, D.C. He was responsible for a broad range of activities, including human research, space technology development, space nuclear power and propulsion, the Lunar Precursor Robotic Program, and NASA’s physical science and life science experiments on the International Space Station and space shuttle. Walz is an Air Force veteran, retiring from active duty in 2003. He received a Bachelor of Science degree in physics from Kent State in 1977 and a Master of Science in solid state physics from John Carroll University in 1979. 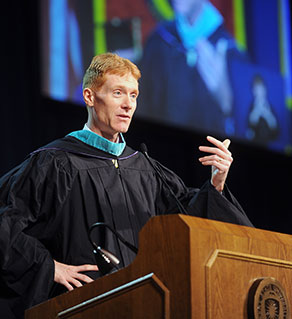 Saturday’s 1:30 p.m. ceremony was for those receiving their bachelor’s degrees from the College of Architecture and Environmental Design; the College of Business Administration; the College of Education, Health and Human Services; the College of Nursing; and the School of Digital Sciences. The speaker for the afternoon ceremony was Dave Ruller, city manager of Kent, Ohio. Arriving in Kent in June 2005, Ruller has been in office for eight years. He brought to Kent 16 years of local government experience – 11 years in Alexandria, Va. (population 125,000) and five years in Kingsport, Tenn. (population 45,000). Ruller is a Phi Beta Kappa graduate of Hobart College, and he holds a master’s degree in administration from Alfred University. Ruller is also a graduate of the University of Virginia’s Senior Executive Institute (SEI). Ruller has four years’ experience in Malcolm Baldrige Quality Assessment training, and he has been a featured speaker at national conferences on the deployment of quality practices to produce high performance in public sector organizations. Ruller has been recognized by the American Society for Public Administration (ASPA), Chamber of Commerce, Jaycees, and the cities of Alexandria and Kingsport for leadership excellence. Ruller is a former chapter president for the American Public Works Association (APWA) and a former board member of Keep America Beautiful. He is currently a member of Rotary International.

Missed the Ceremony?  Watch the Video.