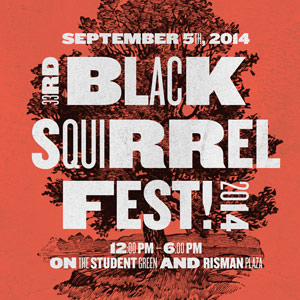 “This is the event of the year in terms of free stuff,” said Kent State senior public communications major Alyssa Mazey. “My friends and I will for sure be out there again this year.”

The Kent State food truck, Fork in the Road, was on site from 12-3 p.m. serving up some festival favorites. Dining plans were valid at the food truck. Local bands and DJs performed throughout the event, each played an hour set. Festival goers enjoyed musical genres ranging from rap to folk and some jazzy-blues in between.

The Black Squirrel Festival also offered students a chance to learn about student organizations, explore different university departments and learn more about the Kent community. Local vendors had everything from coupons to clothing, jewelry and, of course, more free stuff. Many of the 300+ student organizations were set up at the event to recruit new members and encourage students to get involved.

Lindsay Wheeler, assistant manager for Kent Student Center Programming, said the Black Squirrel Festival is an excellent opportunity for students to revisit with student organizations, or catch up with some that they didn’t have a chance to talk with during the back-to-school Blastoff event.

“Blastoff was only two hours,” Wheeler said. “The Black Squirrel Festival is all day and gives students the opportunity to visit more of the tables.”