Leaders join more than 300 from university community in donating

Warren accepted the challenge that was tweeted Aug. 13 by Rebecca Windover, an assistant residence hall director whose father-in-law has been battling ALS for more than a year.

“This is a wonderful opportunity to support ALS research and families,” Warren said.

“My brother’s best friend lost his life to ALS after a valiant five-year battle, so I didn’t hesitate to agree when Rebecca sent me the challenge. This is about taking a stand together to help others, and I’m glad that we can donate to such a worthy cause.” 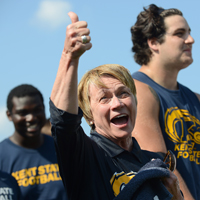 “I cannot explain how difficult this disease is on those suffering from the disease as well as those around them,” Windover said. “The videosposted have not only provided awareness, but laughter for my partner's father. The millions of dollars raised will provide support for numerous families whose loved ones are stricken by this disease. It is bittersweet that my partner's father will pass before a cure can be found, but it is my hope that the momentum from the ice bucket challenge will continue and that other families will not be affected by this disease.”

Warren, Nielsen, and Haynes completed the challenge in the south end zone of Dix Stadium courtesy of members of the football team who dumped buckets of ice water on to the trio’s heads.

“The whole team took part, and we were all looking forward to it,” Haynes said. “It’s not often you see the president of a college doing something like this, so I’m happy we joined her for this great cause.”

At the conclusion of the ice water dump, Warren issued an Ice Bucket Challenge to Dr. Roderick McDavis, President of Ohio University, who accepted by phone. The Bobcats will visit Dix Stadium on Aug. 30th to open this year’s college football season against the Golden Flashes.

"I am honored to accept this challenge on behalf of all those who have fought and are currently fighting this deadly disease," Nielsen said.

In addition to the Ice Bucket Challenge, the Kent State community has come together twice in recent years to raise money for ALS research by taking part in Zumbathon exercise fundraisers outside of the student center.

“It’s incredible to see this kind of response and outpouring of support for the ALS community,” said Kristi Koon, Director of Direct Response Marketing for the ALS Association. “Please extend our gratitude to your president, university leaders, and community for contributing time and money to the fight against ALS.”

For more information on ALS and the Ice Bucket Challenge, visit: http://www.alsa.org