Kent State University’s efforts to help students succeed and graduate resulted in a big payoff for Northeast Ohio. The university accounted for the largest increase in the number of new graduates among colleges and universities in the Akron Metropolitan Statistical Area (MSA) of Summit and Portage Counties, Ohio, contributing largely to the region’s win of a $1 million prize from CEOs for Cities’ Talent Dividend Prize national competition. The Northeast Ohio Council on Higher Education (NOCHE) coordinated the participation of five institutions of higher education that serve Summit and Portage counties.

The Talent Dividend Prize was awarded today to the metropolitan area that exhibited the greatest increase in the number of postsecondary degrees granted per one thousand population over a four-year period. Degrees from the 2009-2010 school year to the 2012-2013 school year were weighted with one point for each associate degree and two points for each bachelor’s or advanced degree. According to CEOs for Cities, the Akron MSA produced 2,139 more postsecondary degrees than four years ago for an astonishing 20 percent increase.

With Kent State’s contributions from its Kent Campus, the Akron MSA beat out 56 other metropolitan areas across the country to claim the top prize. Kent State graduates are responsible for 57.69 percent of the total gain in degrees in the Akron MSA, and using the competition’s point system, Kent State graduates account for 61.53 percent of the percentage point increase in degrees awarded.

“Our focus is on student success, providing all students with the opportunity and support to achieve their dreams and aspirations. I truly appreciate that CEOs for Cities recognizes the great work that our universities and region are doing to help students reach the finish line of graduation.”

Kent State’s faculty, staff and administration have dedicated themselves to improving student success and degree completion. The university has built on that dedication by improving academic advising, expanding support services and co-curricular experiences, and providing students with the Graduation Planning System, or GPS, that helps students track their progress to graduation.

“In addition, we have recently launched our ‘Formula to Finish’ initiative that encourages students to register for and pass at least 15 credit hours per semester,” said Todd Diacon, Kent State’s senior vice president for academic affairs and provost. “By taking and passing at least 15 credit hours per semester, students will be on track to graduate in two years to get their associate degree or four years for a bachelor’s degree. Students who follow the ‘Formula to Finish’ program and graduate in four years versus six can save $36,000.” 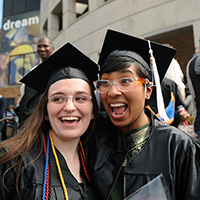 The university is setting retention records, which also contribute to student success. This fall, Kent State reported that retention of its Kent Campus freshmen had increased to 81.7 percent, up from last year’s record retention level of 77.6 percent. This represents the percentage of freshmen who continue their studies at the university for their sophomore year.

In addition, the Kent Campus welcomed its highest-achieving freshman class this fall while also setting a new all-time high enrollment record. The academically motivated freshmen have an average grade point average (GPA) of 3.34 and average ACT score of nearly 23; both are records for an incoming class. Unduplicated headcount at the Kent Campus for fall 2014 is 28,457, exceeding last year’s record of 28,019. This marks the eighth consecutive year of enrollment growth on the Kent Campus.

Kent State recognizes the very important role that higher education plays in terms of being an economic driver with a local and regional impact, Warren said.

“We all know that educational access and attainment are linked inextricably to regional prosperity,” Warren said. “And so we must also be vigilant about economic development. The great news is that our region is brimming with leaders in the public and private sectors who are committed to economic development in word and deed.”

A 2010 economic impact study to commemorate the university’s centennial reported that Kent State’s eight-campus system generates $1.96 billion in added income to the Northeast Ohio economy. This includes $1.6 billion attributed to raising the educational attainment and productivity of the workforce; $292 million in added income due to Kent State’s business, employment and research operations; and $64 million generated from Kent State attracting nonlocal students and visitors to the region.

Kent State will receive $143,750 of the $1 million Talent Dividend Prize money. The university intends to invest the dollars in programs geared toward college completion. Other higher education institutions in the Akron MSA that also will receive a portion of the prize money are Hiram College, Northeast Ohio Medical University (NEOMED), Stark State College and the University of Akron.

Kent State is Northeast Ohio’s leading public research university with more than 41,000 students. The university’s eight-campus system is among the largest regional systems in the country. Today, Kent State has become an engine for economic, cultural and workforce development – locally and internationally – as one of the premier Ohio universities. The university is ranked among the nation’s 77 public high-research universities by the Carnegie Foundation for the Advancement of Teaching. For more information about Kent State, visit www.kent.edu.