During the year-long celebration various activities were planned to create campuswide excitement and engagement. These included:

"Where is This at Kent State University?" 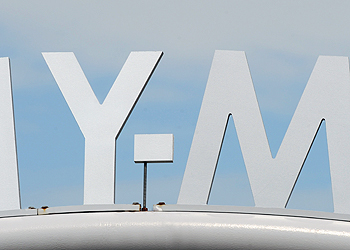 While Kent State University celebrated its centennial, the buildings, structures and landscapes that comprise its eight campuses continued to change and expand. So a "Where is This at Kent State University?" challenge was launched for the university community. Participants identified the location and the Kent State campus captured in the photograph via the university's faculty/staff e-newsletter. To the right is one example from October 5, 2010.

A Centennial Trivia Challenge was included as a contest element during the celebration.

There was an option to purchase a black squirrel statue and decorate it for the Kent State Centennial Squirrel contest. Winners were announced at Homecoming 2009. The contest was open to all Kent State students, student organizations, staff, faculty, alumni, all community residents, merchants and organizations.

The Making of a Kent State Mascot and His Legend. What came first: "Flash" or the egg? Believe it or not, Kent State's mascot hasn't always been the dashing, jersey-wearing, fierce golden eagle he is today. Take a look back at Kent State Athletics history and trace Flash's prestigious mascot lineage in "A History of Kent State in Fins, Feathers and Fur" in the Summer 2009 issue of the Kent State Magazine (page 16).