Rain barrels, rain gardens, and bioretention cells are increasingly used as green infrastructure to capture and slow storm water runoff before it gets to nearby urban waterways, where it can cause flooding, erosion and pollution. 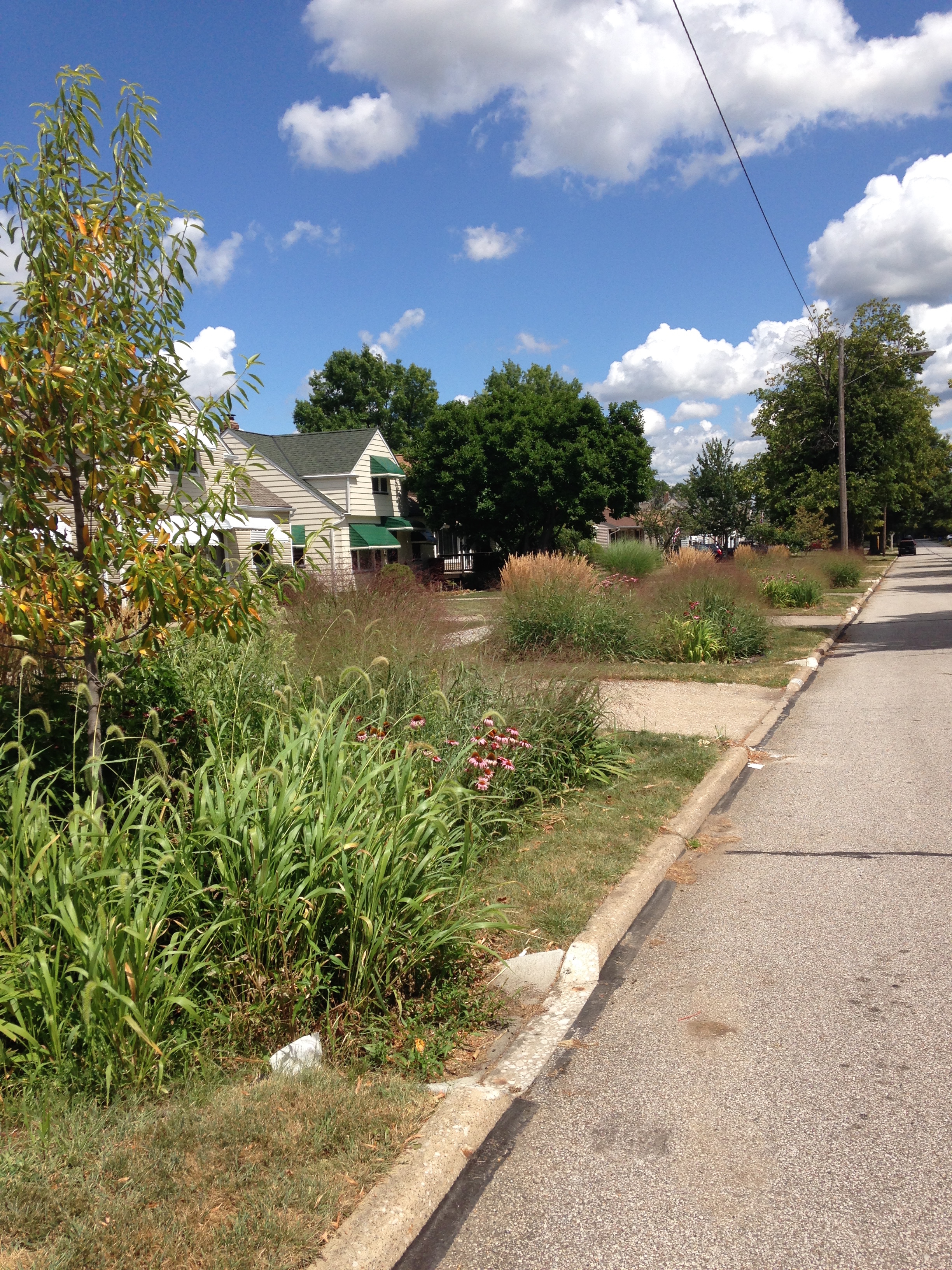 “Stormwater management doesn’t have to be something limited to new developments or big parking lots,” said study author Anne Jefferson, Ph.D., assistant professor of Geology in Kent State’s College of Arts and Sciences. “We can put it into residential neighborhoods and make it work.”

Jefferson and Kimberly Jarden, who is a graduate student in Kent State’s Department of Geology, partnered with the Cleveland Metroparks on a study to measure the effectiveness of green infrastructure in two neighborhoods in Parma, Ohio. The researchers found that the green infrastructure was able to reduce peak stormflow by 33 percent and total runoff by 40 percent, even though less than 15 percent of homeowners participated in the project. These dramatic effects were possible because the green infrastructure in this study captures stormwater from the street itself, and not just house rooftops.

Jarden, who graduated in May with an M.S. in Geology, Jefferson and co-author Jennifer Grieser, senior natural resource manager at Cleveland Metroparks, recently reported their study results in the journal Hydrological Processes. Their article was titled “Assessing the Effects of Catchment-Scale Urban Green Infrastructure Retrofits on Hydrograph Characteristics”. Jefferson also recently presented this work at the Geological Society of America Conference in Baltimore to a standing-room-only session.

“These strategies are used throughout the country and in other countries, but the novel thing is that we were able to demonstrate that they work at a larger scale,” Jefferson said. “It is important for convincing people that it’s worth investing in these technologies. I think stormwater management is an important societal issue, but one that many take for granted.”

Cleveland Metroparks funded the study after receiving a grant from the U.S. Environmental Protection Agency through its Great Lakes Restoration Initiative grant program. They chose four streets in Parma adjacent to West Creek Reservation, which is a Cleveland Metroparks property, and recruited homeowners to participate in the program.

“One of the things that we show in the paper is that if you just installed rain barrels and rain gardens and collected only roof runoff you couldn’t get anywhere near those reductions,” Jefferson said. “The bioretention cells that collected runoff from the street were important in collecting more storm water runoff, even from parts of the neighborhood that weren’t participating in the project.”

The bioretention cells are located all along the street in the landowners’ tree lawns. During a rainstorm, water running down the curb is diverted and flows into bioretention cells; similar to large rain gardens. Water then soaks into the ground slowly, reducing peak runoff. Some water is taken out of the storm sewer system completely reducing the total runoff volumes.

“Together, the bioretention cells, rain gardens and rain barrels begin to restore the watershed's overall hydrology by allowing stormwater to soak into the ground,” Grieser said. “Applied at a larger scale, these practices could reduce flooding and stream bank erosion, and therefore improve aquatic habitat and overall stream function.”

Cleveland Metropark’s work on urban water restoration grows out of their efforts at the Watershed Stewardship Center at West Creek, a groundbreaking partnership between Metroparks, the Northeast Ohio Regional Sewer District, and the West Creek Conservancy to promote urban watershed management throughout Northeast Ohio. Jefferson hopes that this project can be used as an example of effective ways to beautify neighborhoods and control stormwater runoff for other communities.

Under its Regional Stormwater Management Program, the Northeast Ohio Regional Sewer District will charge a stormwater fee based on impervious surface. Residents and businesses can reduce their stormwater fee through stormwater credits for practices such as those studied by Jefferson.

“We very much appreciate the work done by Kent State and Cleveland Metroparks with these City of Parma projects,” said Kyle Dreyfuss-Wells, deputy director of Watershed Programs for the Sewer District. “They have shown the importance and effectiveness of retrofitting existing neighborhoods with green infrastructure and highlighted that it is never too late for good stormwater management.”

The researchers are also interested in looking at this on an even bigger scale as stormwater projects are built in area watersheds. There are plans to build a computer model of the West Creek watershed and simulate different stormwater management strategies and the influences of climate change.

“We know that climate change projections for this region include more intense rain events, which can lead to more flooding and more stormwater runoff problems,” Jefferson said. “We want to see what stormwater management strategies will increase our resilience to projected climate change.”

Photo Caption:
Bioretention cells were installed in the tree lawns in front of homes on Klusner Ave. in Parma, Ohio. Photo taken in August 2015 by Anne Jefferson.