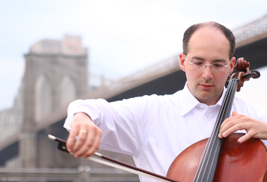 The Kent/Blossom Music Festival Faculty Concerts continue Wednesday, July 3, with a performance by Cleveland Orchestra principal cellist Mark Kosower at 7:30 p.m. in Ludwig Recital Hall in the Music and Speech Building, located at 1325 Theatre Dr. on the Kent Campus.

Kosower, principal cello of the Cleveland Orchestra since 2010, also serves as faculty at the Cleveland Institute of Music. Kosower has released two recent albums: “The Complete Cello Concertos of Alberto Ginastera” with the Bamberg Symphony, and Miklós Rózsa’s “Rhapsodie” for cello and orchestra.

“What an opportunity to hear the principal cellist of the Cleveland Orchestra, Mark Kosower, perform the final three cello suites by the greatest composer of the baroque era, J.S Bach,” says Keith Robinson, co-artistic director of Kent/Blossom Music. “Mr. Kosower's recital last year was a true highlight of the festival, and this concert promises to be no exception!”

Kosower’s solo appearances include performances with the Orchestre de Paris, Hong Kong Philharmonic and National Symphony Orchestra of Taiwan. He has also appeared with the symphony orchestras in U.S. cities, including Indianapolis, Milwaukee and Seattle.

He also has performed as a recitalist at the Great Performers Series at the Lincoln Center, at the Kennedy Center for the Performing Arts, the Aspen Music Festival and the Philadelphia Chamber Music Society. He is also an Avery Fisher Career Grant recipient.

A six-concert subscription is $72 for adults and $60 for seniors. To purchase a subscription, call the Kent/Blossom Music office at 330-672-2613. Subscriptions may be purchased with check or credit card (Visa, MasterCard or Discover).

Single tickets are on sale at $15 for adults, $13 for seniors, and $5 for students with valid student I.D. or under 18. For more information about the Kent/Blossom Music Festival, visit www.kent.edu/blossom