Governor Appoints Student to Kent State Board of Trustees

Monique Menefee of Cleveland, Ohio, has been appointed by Gov. John Kasich to serve as a student member of the Kent State University Board of Trustees. Her term began on July 19, 2013, and ends May 16, 2015. 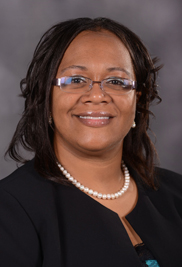 Kent State’s Board consists of 12 members, nine of whom are voting members, who are appointed by the governor of the state of Ohio, with the advice and consent of the state senate. Menefee joins Alex Evans, a Kent State student who is a triple major in biology/pre-med, business management and public health, as the two student trustees – one graduate and one undergraduate – appointed to the board for overlapping two-year terms of office.

Menefee exemplifies dedication, persistence and tenacity, both in the classroom and in service. She is pursuing a Master of Education in higher education administration and student personnel and received her Bachelor of Science in Spanish translation with a minor in sociology from Kent State earlier this year. She earned a 3.46 GPA and was named to the Dean’s List.

As an undergraduate student, Menefee studied abroad in Argentina, and she took her passion to Washington, D.C., as an advocate for TRIO, a set of five federally funded college opportunity programs that motivate and support students in their pursuit of a college degree.

Prior to enrolling at Kent State, Menefee spent five years on active duty as a radio communications specialist with the United States Air Force.

Her leadership activities include serving as a Kent State student ambassador, peer mentor and student advisory council member for the College of Arts and Sciences. Away from campus, Menefee has served as a Spanish tutor for homeless children with Project R.I.S.E. in Akron and as a student trustee and board student scholar at Cuyahoga Community College.