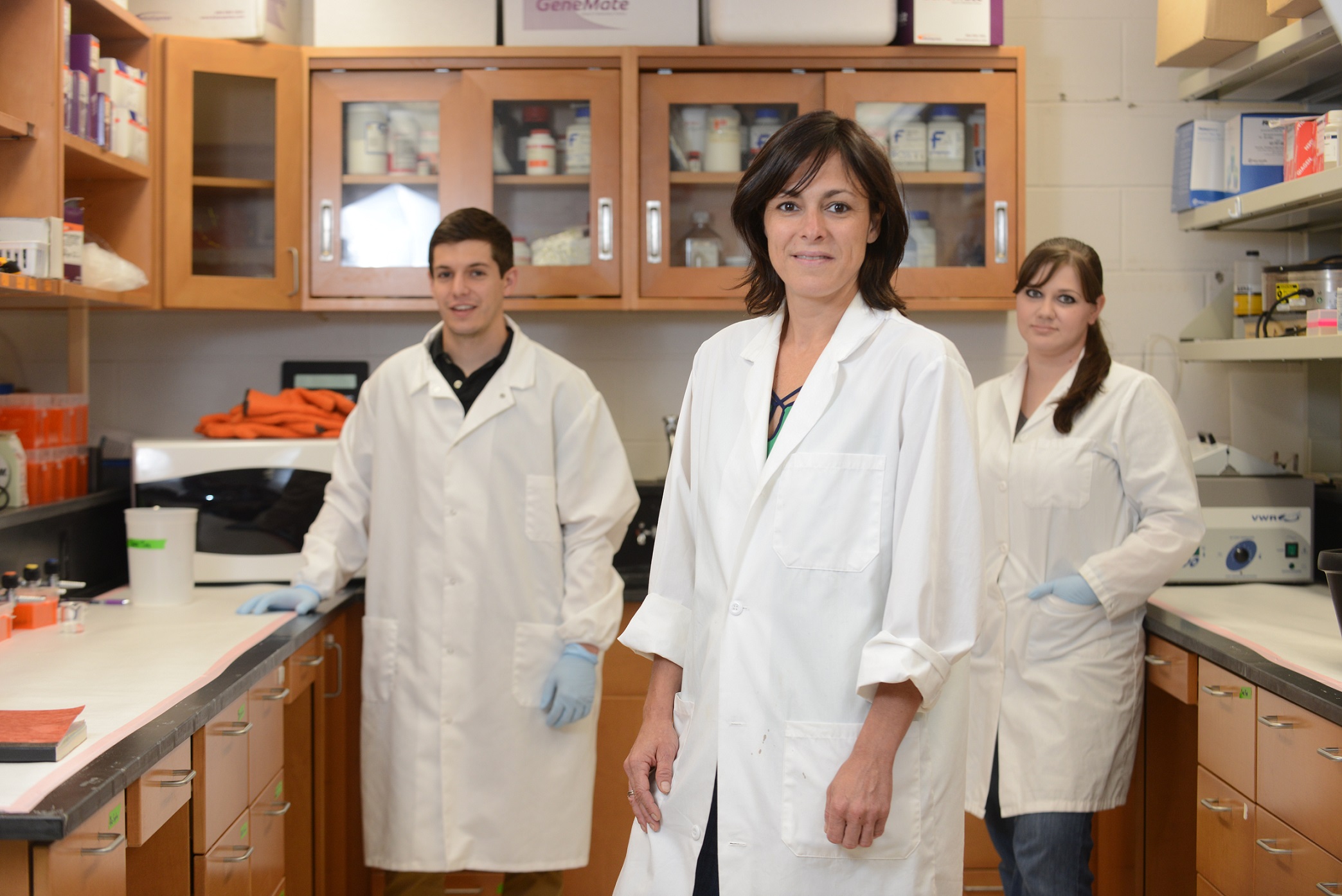 Gemma Casadesus Smith describes herself as a scientist who likes to investigate ideas that run counter to prevailing thought. Her research on Alzheimer’s disease has looked at the effects on the brain of oxidative stress, hormone treatments and the regulation of metabolism.

When a new avenue for a therapy appears possible, her approach is, “Let’s see if this works,” she said.

Smith, an associate professor of biology in the College of Arts and Sciences at Kent State University, is one of the featured speakers at Kent State’s third Neuroscience Symposium on April 9–10. The symposium, called “The Neuroscience of Aging,” is free and open to the public.

As a Ph.D. student at Tufts University, she presented research on how blueberries affect learning and memory in the brain. As we age, we are exposed to more free radicals, which hasten the aging process. Blueberries are high in the antioxidants that combat this.

One of the first consequences of Alzheimer’s disease, she noted, is that people get lost. In her studies of the hippocampus, the part of the brain devoted to learning and memory and to finding locations, she found that feeding blueberries to older laboratory rats improved their ability to find a “safe spot” by using cues in the environment. The hippocampi of these older rats grew more new neurons.

A New Path Suggested by a General Practitioner

A general practitioner from North Carolina came to talk to Mark Smith about why Alzheimer’s disease stabilized in many of the older patients he was treating for prostate cancer. The general practitioner was treating them with leuprolide, a compound that decreases testosterone production in men (and estrogen in women) by regulating another hormone, luteinizing hormone (LH). LH is produced in the pituitary gland and regulates estrogen production.

Most scientists thought that a loss of estrogen and testosterone was a main culprit of memory loss in the aged. Casadesus Smith was put in charge of a project to investigate the other possibility, suggested by the general practitioner’s experience, that lowering LH, even when lab animals were chemically castrated, would improve learning memory.

Her experiments showed that animals treated with leuprolide got better, cognitively, demonstrating that the effect of hormones on Alzheimer’s disease required more probing.

Since then, she has investigated how luteinizing hormone affects cognition. In treating menopausal laboratory mice, she learned that bringing down LH levels resulted in improved cognition, showing that estrogen is “not the only player” in brain health.

How Hormones and Metabolism Affect Cognition

She is now trying to understand how LH regulates aspects of neural plasticity that are associated with cognitive function.

“Our brain is very plastic – it changes – the neurons change,” she said. Her research group is studying the signals associated with this. Neurons connect with other neurons at their ends through dendrites, which are like little hairs. As we age, our dendrites diminish, and the neurons are less plastic, or less able to connect.

“What we’re adding is a more complete study of the role of reproductive hormones – not only estrogen – on learning and memory,” she said.

Another area attracting new attention is the effect on cognition of regulating metabolism. Low metabolic function is seen early on in people with Alzheimer’s disease, she said. Both aging and obesity are risk factors for Alzheimer’s, and both are associated with metabolism issues. She is studying the effects of the hormones leptin, produced in fat cells, and amylin, which helps regulate insulin sensitivity. She will lecture about this work at the symposium.

Giving amylin to lab mice has resulted in cognitive improvement and changes to their brains, she said. Amylin appears to protect learning and memory, regulating the amyloid-beta levels in the brain.

So far, treatments of Alzheimer’s disease have not worked once plaques are established and neurons are lost. One of the problems with the disease is that once a person shows signs of Alzheimer’s, they probably have had it for 20 years, she noted.

But Smith believes that scientists are now on the right track, doing the right studies to find out how Alzheimer’s disease might be prevented. The answer to treating Alzheimer’s is likely to have many facets, she cautioned.

“It may be that a whole lot of stuff happens together and drives you off the deep end,” she said.  “We don’t know what the switch is, or if there is more than one.”

Register today for the Neuroscience of Aging symposium on April 9-10 at the Kent State University Hotel and Conference Center in Kent, Ohio.