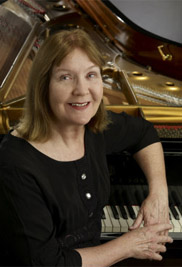 Single tickets are on sale, for adults $15; seniors, $13; and students, $5. For more information about the Kent/Blossom Music Festival, visit www.kent.edu/blossom. To purchase tickets, call the Kent/Blossom Music Festival office at 330-672-2613 or visit www.kent.edu/blossom. Subscriptions may be purchased with check or credit card (Visa, MasterCard or Discover).

Jones and Weiss will perform such works as “Suite Popular Española for Cello and Piano" by Manuel de Falla, "Trio for Oboe and Bassoon and Piano" by Francis Poulenc and "Piano Quintet in A minor, Op. 84" by Edward Elgar.

Jones, principal keyboard for the Cleveland Orchestra, has performed more than 50 different concertos in 200-plus performances with the Cleveland Orchestra. Jones chairs collaborative piano at Kent/Blossom Music Festival, and also teaches at the Cleveland Institute of Music. She has appeared as a soloist with orchestras in cities including Boston, Chicago and Philadelphia.

Fu joined the Cleveland Orchestra at the start of the 2011-2012 season. A native of Shanghai, China, Fu has won prizes in competitions in Europe, China and the United States. He holds a Bachelor of Music degree from the Shanghai Conservatory, and a Master of Music degree from Rice University. He is currently a Doctor of Musical Arts degree candidate at Rice University, studying with Cho-Liang Lin and Sergiu Luca.

Konopka joined the Cleveland Orchestra in 1991 and has been assistant principal viola since 1993. Currently a faculty member at the Cleveland Institute of Music, Konopka has taught at the Kent/Blossom Music Festival and has performed at the chamber music festivals of Banff, Taos and Pensacola.

Stees has been assistant principal bassoon of the Cleveland Orchestra since 2001. Stees has concertized extensively in Europe, South America and Asia, including a solo tour of Hong Kong and China. His solo appearances include performances with the Hartford Symphony Orchestra, the South Bend Symphony Orchestra and the Brevard Music Center Orchestra.

Sundet serves as full-time assistant professor of oboe at Kent State University. She is co-artistic coordinator of the Kent/Blossom Music Festival and is now the musical director of the John Mack Legacy Oboe Camp in Little Switzerland, N.C. Sundet specializes in performing in Bach Festivals, where she is a featured soloist on the oboe, oboe d'amore and the English horn.