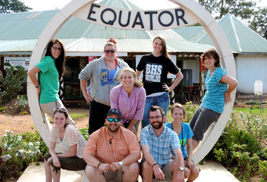 Kent State University alumnus Ryan Rohrer led eight students to study in Uganda during the Summer Intercession 2013, May 20 through June 7.

“The entire trip was completely remarkable and amazing,” says Meghan Walker, junior early childhood education major. “From the wildlife and scenery to the interactions with locals, the trip was unforgettable.”

Prior to the trip, the students had to meet on campus three days for the Introduction to Global Tourism class, where social, economic and environmental issues of tourism were discussed.Once in Uganda, they visited the capital city, Kampala, and the students visited Makerere University and met with local students in the tourism program. Also, while in Kampala, Rohrer and the students spent time with elementary school kids.

As an early childhood education major, Walker really enjoyed visiting with a local school and bringing them school supplies, she says.

“My favorite part of the trip was probably during our trip to Queen Elizabeth National Park because there were so many animals that would come right up to our house,” says Carley Pasquale, junior recreation park and tourism management major.

Pasquale says she wants to work with animals in a park system to help protect and educate people about them. This experience helped her make that decision, she says.

“The experience that I will never forget was going to see the mountain gorillas, which was very unique,” Rohrer says. According to Rohrer, while visiting the Bwindi Impenetrable National Park, the team spent an hour with the gorillas. They were able to see a family of about 20 gorillas, says Rohrer.

In Uganda, Rohrer says the students learned about how locals are dealing with a new wave of tourism into their country, and how the national park system works.

“Just being in Uganda, you are able to see the world in a different perspective,” Rohrer says. “That alone will change how you see global issues.”

Walker says the trip gave her a new perspective on a lot of things in her life, and that was the biggest thing she gained.

“Witnessing how happy people are with so much less than me was a huge eye-opener,” says Walker. “Also, a new-found appreciation for a handful of basic things like running water, working toilets, paved roads and a fully stocked grocery store right down the road have also impacted my life since the trip.”

Rohrer was a student on the first education-abroad trip to Uganda in 2007 that was led by Andrew Lepp, associate professor in Kent State’s School of Foundation, Leadership and Administration. Rohrer says after that trip, he knew he wanted to pursue a career in the field of international education and tourism.

After Rohrer graduated from Kent State, Lepp mentioned that he would like to give him the opportunity to lead the Uganda trip.

“I would like to say my previous experience overseas and teaching led to the decision to have me lead this trip,” says Rohrer.

Students applied for the trip through the Gerald H. Read Center for International and Intercultural Education at the College of Education, Health and Human Services.