Skip to main content
Live Chat
Kent State researchers are awarded a patent for the next generation of the therapy cycle known as the SMART Cycle, for Speed Manipulated Adaptive Rehabilitation Therapy. 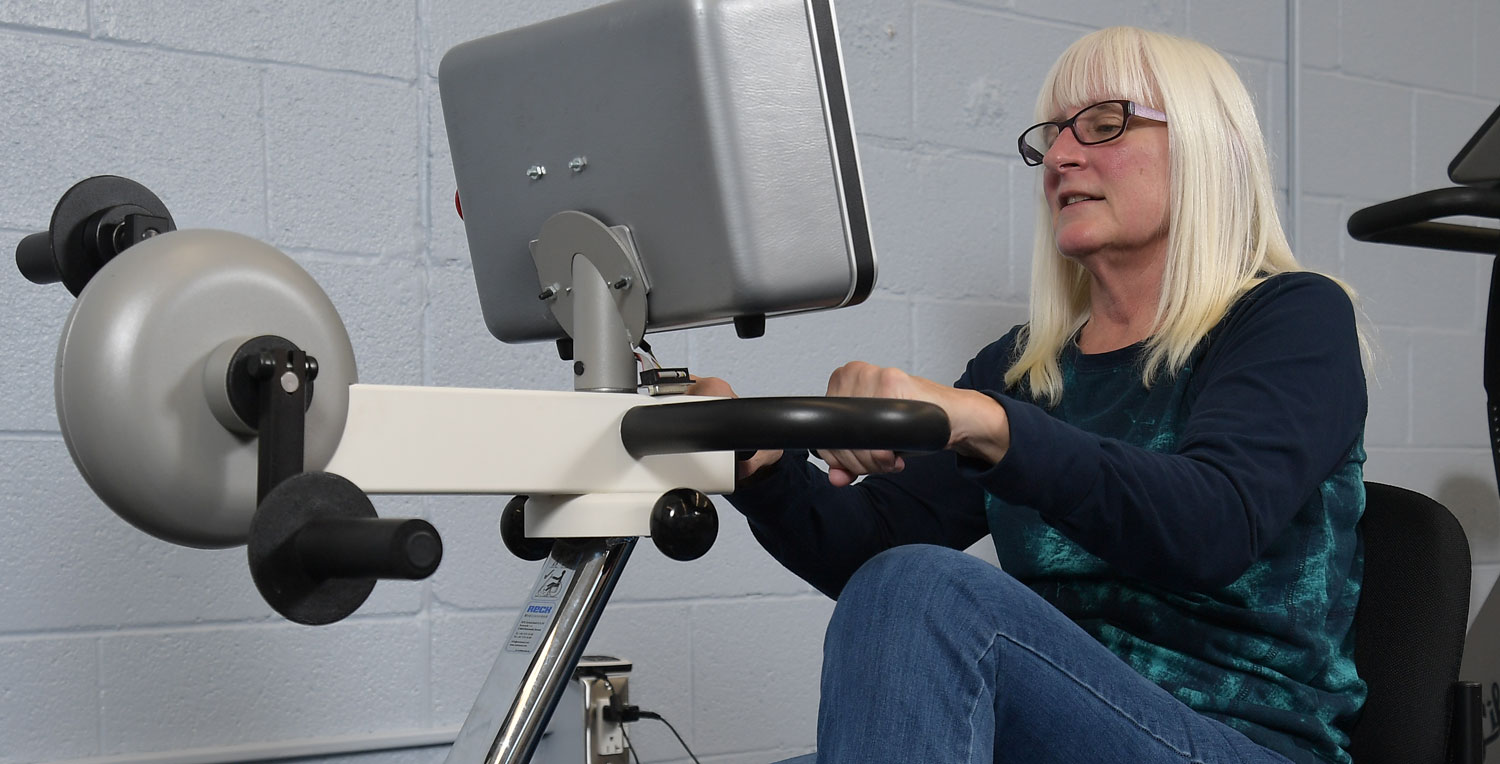 Anne Heller’s face was getting red as she pedaled the stationary bike.

The 59-year-old Cuyahoga Falls resident had agreed to take part in experiments at Kent State University using a bike developed by researcher Angela Ridgel, Ph.D., in Kent State's College of Education, Health and Human Services, to help ease the symptoms of Parkinson’s disease.

While Ms. Heller was doing her best to maintain the pedaling speed, it was actually the bike that was setting the pace. The automated Dynamic Cycle was trying to force Heller to keep up.

While the workout was a bit grueling at times, Ms. Heller said the effort was worthwhile if it would place researchers closer to finding a cure for those suffering from the debilitating neuro-degenerative disorder, which has afflicted her for the past nine years.

Ms. Heller volunteered to be a research participant after learning about the ongoing study at a Parkinson’s boot camp that she had attended in Akron.

“I want them to find a cure for Parkinson’s so I don’t have to deal with it anymore,” she said. “I want to do my part.”

While the therapeutic cycle may never cure Parkinson’s, researchers believe that it can dramatically improve the disease’s symptoms, including neurological weakness, tremors, and rigidity.

Dr. Ridgel has dedicated her research since 2006 to the impact of cycling therapy on Parkinson’s sufferers.

On Oct. 31, Dr. Ridgel and engineers working with her were awarded a patent for the next generation of the therapy cycle known as the SMART Cycle, for Speed Manipulated Adaptive Rehabilitation Therapy.

The connection between cycling and relief from Parkinson’s was something that one of Dr. Ridgel’s colleagues, Dr. Jay Alberts, discovered by accident.

Dr. Alberts is on staff at the Department of Biomedical Engineering at the Lerner Research Institute at Cleveland Clinic. Dr. Ridgel served as a post-doctoral fellow in Dr. Alberts’ lab from 2006 to 2008.

When she began her fellowship, Dr. Alberts, an avid cyclist, shared with Dr. Ridgel the story of how he had participated in the annual bike ride across Iowa known as RAGBRAI, riding lead on a tandem bike with a friend who had Parkinson’s pedaling on the back.

After the ride, the friend shared with Dr. Alberts that her Parkinson’s symptoms seemed to dissipate dramatically. “She told him, `I don’t feel like I have Parkinson’s when I ride with you,’ “ Dr. Ridgel explained.

The situation had Dr. Alberts wondering how his helping to pedal could prove more beneficial than his friend pedaling on her own on a single bicycle. He theorized that as an experienced cyclist he had a more efficient cadence, and wondered if his friend, perhaps, was having a reaction to someone forcing pedaling on her at a faster rate.

When Dr. Ridgel, also a cyclist, joined Dr. Albert’s lab, he proposed that they begin to study the effects of exercise on Parkinson’s patients to determine whether there was any science was behind his friend’s perceptions.

For weeks, Dr. Ridgel and another trainer pedaled a tandem bike with various study patients on the back, and in 2009 published her research, concluding that Parkinson’s symptoms – slowness of movement, rigidity, and loss of motor skills – were indeed improved when pedaling at a higher cadence or revolutions per minute.

Having trainers available to perform the front seat pedaling, though, was not a realistic option for therapy, explained Dr. Ridgel, who joined the Kent State faculty in 2008. Plus, studies were showing that at times the trainer was doing up to 75 percent of the work. The subjects were trying to help, but many were unable due to their physical limitations, she said.

Motorized exercise bikes already are available, but are not able to replicate the cycling dynamics of the tandem biking that proved so helpful in Parkinson’s therapy.

Working with engineers at Case Western Reserve University and Rockwell Automation in Cleveland, Dr. Ridgel set out to design a device that could perform the same function as a live trainer pedaling the front of the tandem.

In 2012, a grant from the National Institutes of Health provided the money needed to pay for the design and testing of the Dynamic Cycle. While the invention was successful, continued research showed ways it could be improved, so plans for the second version were developed and the patent was applied for in 2014.

Now that the patent has been obtained, Dr. Ridgel is in the process of looking for funding to help pay for the design and manufacture of a SMART Cycle prototype.

Unlike the Dynamic Cycle, the SMART Cycle will offer more advanced programming features. A trainer would be able to remotely control a bike in a patient’s home or physical therapy site. The new version, potentially, will have the ability for one trainer to control more than one bike at varied locations.

The controller box currently on the Dynamic Cycle, will become much smaller, about the side of a computer tablet. Perhaps most important, though, the cycle’s controls will be able to adapt to different patients’ abilities and needs.

As Dr. Ridgel explained, all Parkinson’s patients are different, with varying abilities depending on the disease’s progression. By making the controller adaptive, it would be able to predict what pedaling setting are best for which patients, and would be able to change the parameters mid-session to keep challenging the nervous system and challenging the patient to keep up.

The symptoms of Parkinson’s patients are diagnosed on scale of 0 to 109, Dr. Ridgel explained. After exercise, some patients saw an improvement of as many as 20 points, while others just a few.

The larger question, however, is why this particular type of exercise helps Parkinson’s patients. The cycle therapy will produce marked improvement in some patients, though not all. Dr. Ridgel suspects the exercise is resulting in changes in the brain, specifically, changes in the excitability of circuits in the brain.

In late November, Beth Fisher, PhD., professor of Clinical Physical Therapy in the Division of Biokinesiology and Physical Therapy at the University of Southern California, began using the Dynamic Cycle as part of a long-term study using transcranial magnetic stimulation to measure how the neurons in the brain are talking to each other when a patient uses the cycle.

“This will help us to know what is happening at the brain level,” Dr. Ridgel explained. She is hoping the data from the study will be conclusive enough to help qualify for additional NIH funding to pay for the SMART Cycle’s development.

If research and funding are successful, Dr. Ridgel hopes that within several years the SMART Cycle could be produced on a wide scale so that Parkinson’s patients could have the bike in their homes for daily therapy.

That day won’t come soon enough for Heller, who is a volunteer in a study by Jay Jonas, senior lecturer and doctoral candidate in Kent State’s School of Health Sciences. Mr. Jonas is using the Dynamic Cycle to gather data on changes in motor skills in Parkinson’s patients.

The hardest part of her disease, Heller explained, is not knowing how rapidly it will progress. While medicine can be effective, she is eager for other solutions to help slow the progression of the disease, which already has impaired the movement of her right leg and foot and caused tremors in her right hand.

“I take it one day at a time and try to stay positive,” Heller said.