Kent State University has enhanced safety on campus and in the surrounding area with the introduction of Dexter, the university’s newest officer and explosive-detection canine. Funding for the canine and its ongoing care is provided by Ohio Homeland Security, a division of the Ohio Department of Public Safety, through a federal grant and Ohio Homeland Security budget funds. 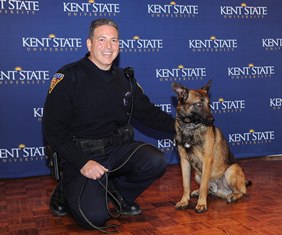 “To protect the people that we care about most, there’s probably no better way I can think of than through preventative measures,” said Ohio Department of Public Safety Director John Born. “The fact that we can not only respond to threats, but clear areas before events that could be targets, will be lifesaving.”

After 10 weeks of training, Dexter, a male Belgian Malinois, is ready to patrol Kent State alongside his handler, Officer Miguel H. Witt. A 14-year veteran of the Kent State Police Department, Witt spent the past five weeks training with canine Dexter in Columbus, Ohio. While his primary duty is on the Kent State campus, Dexter is available to assist local law enforcement if called upon.

“Kent State University is not an isolated campus community, but rather an integral partner and resource for other Northeast Ohio communities in economic development and the provision of increased safety and security resources, should a need arise,” said John Peach, Kent State’s director of public safety and chief of police. “I am thankful to Ohio Homeland Security for providing this valuable asset. Dexter will not only be warmly received by the students, faculty and staff of Kent State, but also be able to provide a much higher measure of safety and security to the campus and greater community.”

Federal grants and budget funds through Ohio Homeland Security cover the expense of the purchase, training, veterinarian bills and other equipment necessary for the program’s success. The cost for each canine is $12,767.