Live Chat
Dean Kahler (left), one of the nine Kent State University students wounded in the May 4, 1970, shootings by the Ohio National Guard, will return to campus on May 9 to serve as speaker for the One University Commencement.

Kent State Alumni Wounded on May 4, 1970, Will Return as Commencement Speakers

UPDATE: Please note that all Spring Commencement ceremonies and pre-commencement celebrations have been postponed. See www.kent.edu/coronavirus/commencement for more information.

Dean Kahler, one of the nine Kent State University students wounded in the May 4, 1970, shootings by the Ohio National Guard, will return to campus on Saturday, May 9, to serve as speaker for the One University Commencement.

Thomas Grace, Ph.D., another of the nine wounded students, will serve as speaker for the Advanced Degree Commencement ceremony on Friday, May 8.

Kahler and Grace’s roles as commencement speakers were announced by Kent State President Todd Diacon at Wednesday’s university Board of Trustees meeting.

“We are privileged to have Dean and Tom serve as our commencement speakers,” Diacon said. “Both have huge hearts and great respect for Kent State and have been loyal alumni for decades. They are the perfect choice to cap off our May 4 50th commemorative year.”

Kahler was just 20 years old and a first-quarter freshman when he decided to attend his first protest rally on May 4, 1970. A guardsman’s bullet pierced his spine and left him paralyzed from the waist down. He has been wheelchair-bound since the shooting.

“I am honored to be asked to be the speaker at commencement,” he said. “I have always considered Kent State my second home. I like coming back and visiting Kent State as often as I can, and I am excited at the prospect of coming back.”

While still formulating his speech, Kahler said his overall theme will be “when one door closes, new ones open, and there’s a big door opening for you.”

Kahler said he also will talk about the importance of good citizenship and giving back to a community through service on boards and commissions for nonprofit organizations and social service agencies.

“Our communities need people to be involved, not only by working and paying taxes,” he said. “We can bring to them our particular areas of expertise that we have after graduating from Kent State.”

Kahler returned to campus in fall 1970, earning a bachelor’s degree in education in 1977.

He spent his life in public service, teaching school for 15 years and working for the Ohio Industrial Commission, the Ohio Attorney General and the Ohio Secretary of State. He served two terms as an elected Athens County Commissioner.

Since the shootings, Kahler has always maintained a positive attitude about his injuries, giving thanks that he survived and thrived. He gives credit to his faith, his family and his circle of friends for lifelong support after the shootings and has expressed his gratefulness for a long career of fulfilling employment.

He has been a steady presence on campus and off when representing the survivors of the Kent State shootings. Kahler regularly takes part in May 4 commemorations and often conducts media interviews about the shootings and their legacy.

After spending many years living in Southeast Ohio, Kahler returned to Northeast Ohio in 2009. Now 70, he is retired and living in Plain Township in Stark County and remains an active community volunteer. 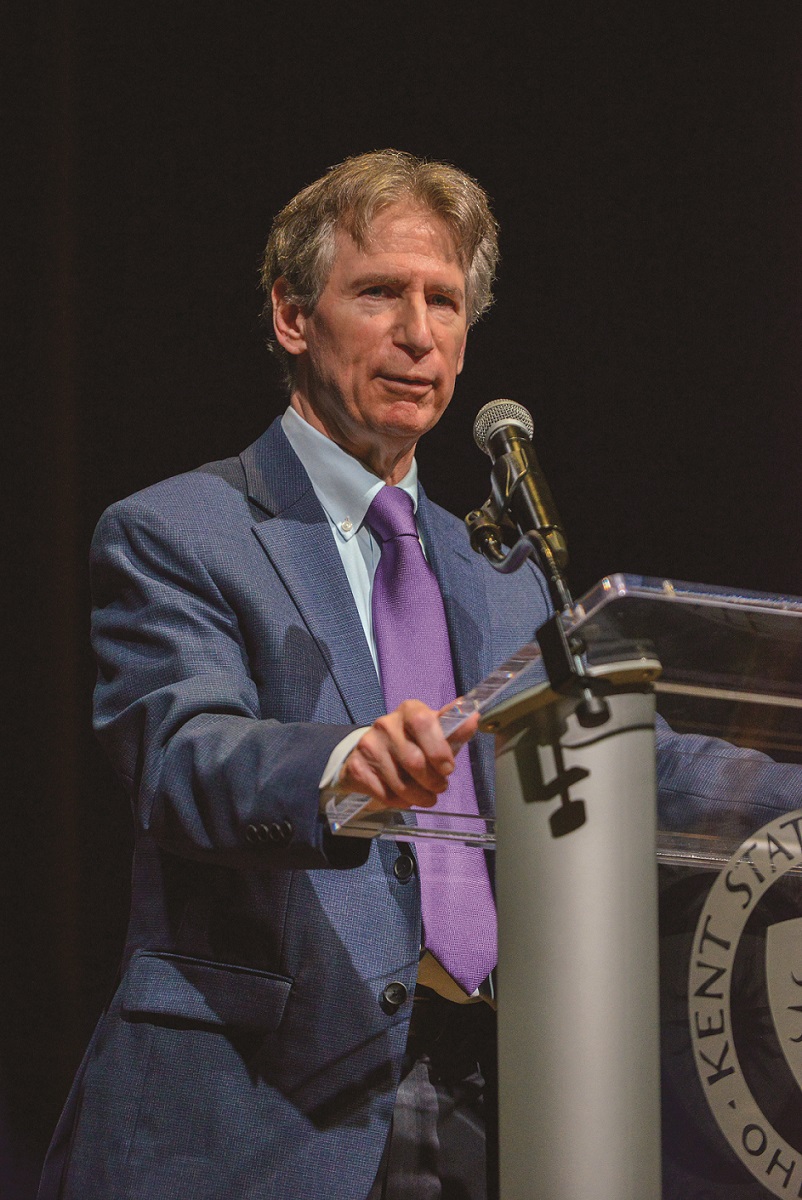 Grace, 20 years old at the time of the shooting and an ardent anti-war activist, was hit in the heel of his left foot during the rally on May 4, 1970, when students had gathered to protest President Richard Nixon’s decision to invade Cambodia, an escalation of the war in Vietnam.

“It is indeed a great honor for me to receive such a weighty invitation to serve as the graduate commencement speaker for spring 2020, 50 years removed from when the university experienced its worst day and month,” Grace said. “Few institutions faced such challenges, and none have done better, over the last quarter century, than Kent State, in meeting the many challenges that arose from that dark time in our history.”

Grace said he had not yet finalized his speech topic.

“Through my participation in the graduate student ceremony, I look forward to being part of the long and successful reconciliation process at Kent State now being guided by President Todd Diacon,” he said.

A historian, scholar and researcher, Grace is author of the book “Kent State: Death and Dissent in the Long Sixties,” which was published in 2016.

After a career in social work and as a union organizer, Grace earned his Ph.D. in history in 2003 and began a second career as an assistant professor of history at the State University of New York (SUNY) Erie Community College.

He is a frequent visitor to the Kent State campus and served as a consultant on the creation of the university’s May 4 Visitors Center.