Who Is in charge? You or Your SmartPhone?

Admit it. We have all used our smartphones at inappropriate and inopportune times: while driving, during family meals, in the bathroom or even the bedroom. 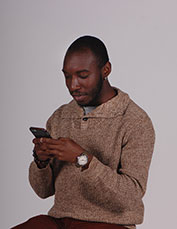 We are a society glued to our phones, but when is it considered out of our control?

According to researchers at Kent State University, the answer depends on the user.

Jian Li, Ph.D., Jacob Barkley, Ph.D., and Andrew Lepp, Ph.D., all from Kent State’s College of Education, Health and Human Services, surveyed 516 college students. They asked the students about daily smartphone use, including inappropriate times such as in class, while studying, at bedtime and late at night after lights out.

The study found that as daily smartphone use increased, so did the likelihood of using the device during inappropriate times. Interestingly, this relationship was lessened by an internal locus of control and worsened by an external locus of control. In other words, students most likely to use the device at inappropriate times were high frequency users who felt as if they had little control over objects in their environment, such as smartphones.

As a result, these individuals had lower grade point averages, lower sleep quality and a lower level of happiness than others in the study.

“One reasonable interpretation of our findings is that individuals who regularly use their smartphone at inappropriate and inopportune times may perceive the device as beyond their control, or perhaps they have unwittingly surrendered some control over their own behavior to their smartphone,” Li said.

Photo Caption:
A Kent State student poses for a photo while using his smartphone.