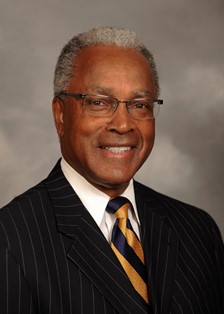 Perry is well known to the area as the recently retired president and executive director of the Pro Football Hall of Fame in Canton, where he successfully led a $27 million capital campaign to remake the iconic museum. Perry came to the hall after serving the Timken Company for 37 years and serving the public as director of the Department of Administration Services under then-Governor of Ohio George Voinovich from 1991-1993 and as the administrator of the General Services Agency under President George W. Bush from 2001-2005.

He is a graduate of Canton’s Timken High School. Perry attended classes at Kent State University at Stark before earning a bachelor’s degree in accounting from the University of Akron. He also has a master’s in management from Stanford University. His long list of awards includes Kent State’s President’s Social Responsibility Award and Kent State’s Distinguished Alumni Award.

Kimmel, a junior finance major and an honors student, has served as a Kent State Student Ambassador at events across the Kent Campus and has been honored for his academic success with a selection for the President’s List and to the Alpha Lambda Delta National Honors Society. Kimmel is currently completing an internship with Eaton Corporation via its multicultural summer program in Marshall, Michigan.

Kimmel’s service to others includes twice using his spring break time to volunteer with Habitat for Humanity in Western New York. He also has served as vice president of the Financial Management Association (FMA) and as vice president of Kent State’s Collegiate Distribution Education Clubs of America (DECA).