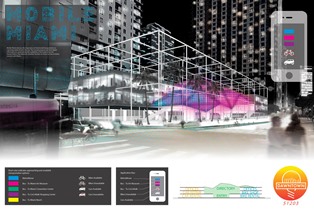 Jasinski and Dureiko learned about the competition from their professor, David Jurca, associate director of Kent State’s Cleveland Urban Design Collaborative, who thought the complex multimodal issues raised in the DawnTown competition would constitute an exciting urban design challenge for his graduate studio students to explore.

“We decided to enter this competition because we were intrigued by the idea of designing something for a colorful and lively city such as Miami,” Jasinski said. “A city like Portland gets all of the attention for being incredibly bike- and public transportation-friendly, so we felt like it would be a greater challenge to work on a project in a city that is trying to make biking and public transportation more prominent, much like here in Cleveland.”

The students named their project after their team name, Mobile Miami. Their project stresses the importance of intermodal transportation as a growing urban trend in the city. The concept projects real-time digital information to communicate the availability of all modes of on-site transportation, which allows for absolute freedom of choice on how to better connect with Miami.

“When Jeff had called me about placing in the competition, I couldn’t believe it,” Dureiko said. “I felt that we had a strong idea, but there were many other entries by professional architecture and design firms from all around the world. For us, as two graduate students, to have our idea selected and mentioned with these different firms and designers is a great surprise and honor for us.”

“I’m very proud of the recognition Matt and Jeff received for their project, given the impressive quality of other submissions,” Jurca said. “I believe they achieved an elegant response to the design challenge as a result of their willingness to iterate and refine the concept many times throughout the process. I know that our architecture and urban design students can perform at a very high level. An international competition provides the opportunity for our students to recognize this themselves.”

Both students plan to enter future DawnTown and other design competitions.

“I think Jeff and Matt’s project gives us all a glimpse of the future of personal mobility,” Jurca said. “We will see more integration of technology to enable seamless and efficient routes utilizing a range of transportation modes, including trains, busses, cars and bikes. The Mobile Miami project envisions a ‘smart hub experience’ that maximizes personal mobility options.”