Aniara Callipo, 25, came to the United States from Brazil with a goal of learning English, but enrolling in Kent State University’s College of Nursing was the holy grail of her educational aspirations. Despite language challenges and a raging pandemic, Callipo graduated with honors in August 2021, four years after she enrolled in the university.

“Graduating is a huge deal for me,” Callipo said. “And I graduated with honors which was a huge deal. English is a second language for me, so when I studied, I had to search words to see what they meant. It was very challenging. My parents are very proud of me.” 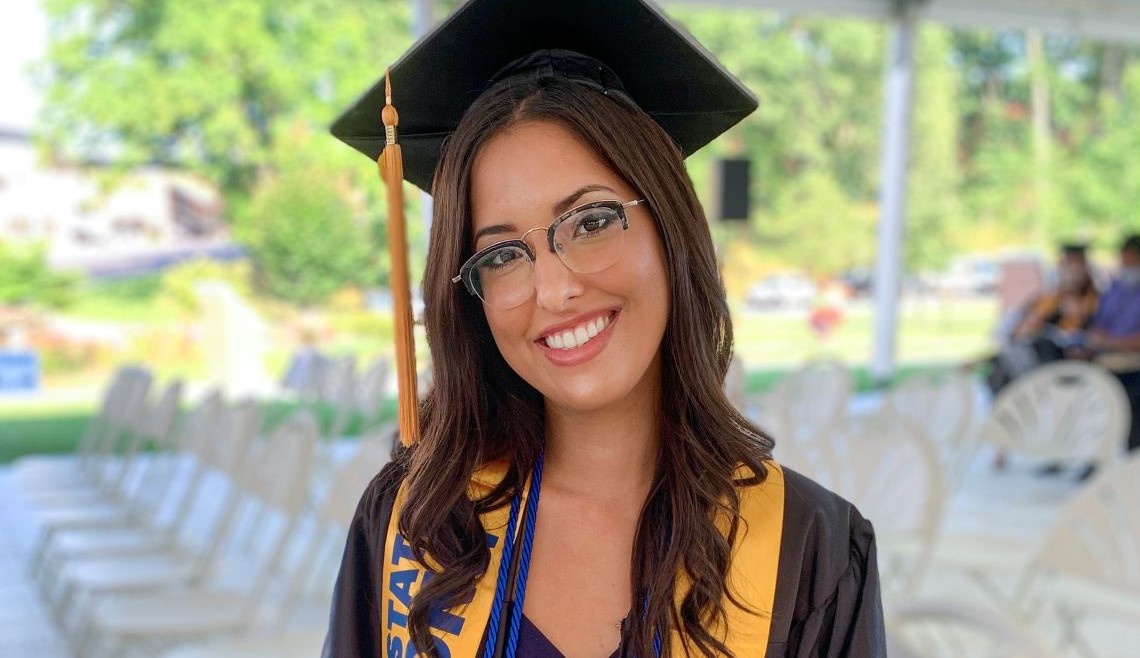 “We could not have exceeded our projected graduation rate without our talented faculty, dedicated staff and hardworking students,” said Kent State President Todd Diacon. “Our work together has resulted in record retention and graduation rates. Thanks to all of you we are a university on the rise.”

Callipo began her college education in Brazil before moving to the U.S. to work as an au pair in 2015. While here she met Trent Hoover, the man who would later become her husband.

She returned to Brazil where she researched Kent State on the internet, and she was attracted to the nursing program and the beautiful campus. Callipo returned to the U.S. as an international student, marrying Hoover in 2018. For Callipo and her family and friends back home in northeastern Brazil, being accepted at Kent State and earning a nursing degree were monumental accomplishments.

She is now a registered nurse in the intensive care unit at Cleveland Clinic South Pointe Hospital Warrensville Heights, where she gained experience working with COVID-19 patients as a nursing assistant while attending Kent State.

“Graduating (with a degree) in nursing in the United States is a big deal because the profession is well respected here, much more than in Brazil,” she said. “When I see my friends in Brazil, they say ‘I can’t believe that you decided to go to another country and learn English.’ ”

Callipo appreciated tremendous support and encouragement from her Kent State professors, and she loved the time she spent on campus.

“Kent State is an amazing college. My professors were amazing. They always said if you have questions come to my office. The campus is beautiful. I love the library. I would do it all over again.”

Kent State offers a plethora of programs that promote student success, with the ultimate goal of reaching graduation. For instance, the Student Support Services  (SSS) program in University College offers support in the core areas of academic success, personal and professional development, and advocacy and support for all students who are first generation, income eligible or are differently-able. The Academic Success Center offers students tutoring, coaching and supplemental instruction.

And the University Degree Completion program, also in University College, provides an opportunity for former students who left the university before graduation to complete their degrees. The program offers three bachelor degree programs that provide flexibility to fit into current lifestyles. Kent State staff work to develop plans to help people reach their goal of graduation.

And new programs at Kent State such as the Flashes Go Further Scholarship Program, which was announced last summer, cover more costs to help eligible students graduate free of debt for tuition and general fees.

Ben Pagani got what he came to Kent State to earn -- the skills to get a job as a broadcast professional. He was recently hired as a multimedia producer at WFMJ-TV, the NBC affiliate in Youngstown. 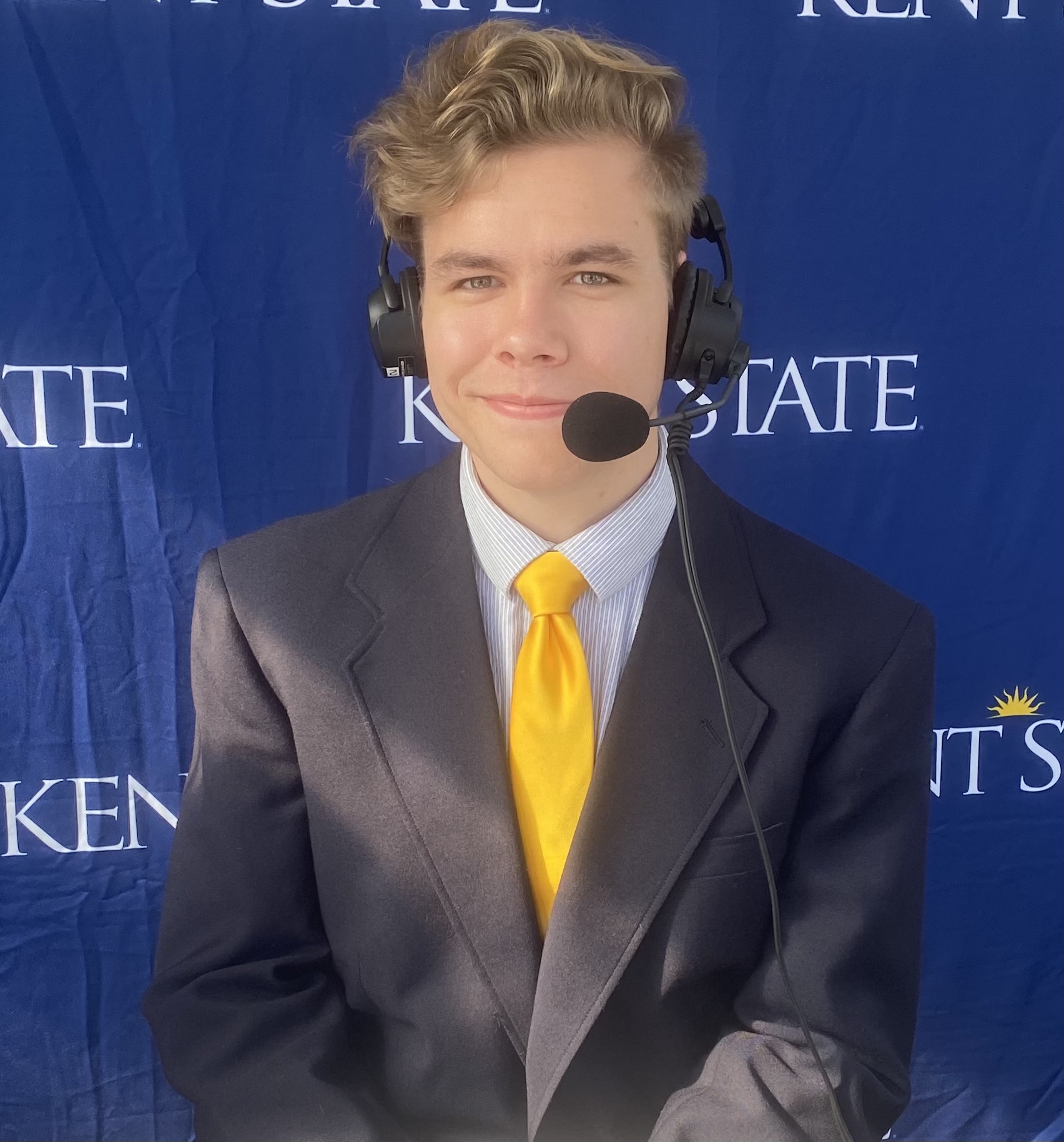 Still, Pagani, 22, isn’t willing to forgo finishing his senior year and earning his degree in Journalism, something he told a Zanesville TV station when he was offered a job there as a sports reporter. The professional experience is excellent, however, these positions aren’t enough to entice him into leaving Kent State before he completes his journey.

“Sure, the Zanesville job sounded great, but I’d have to move, I would be in loan debt and not have a degree,” Pagani said. “If that job didn’t work out and I went for other jobs, I wouldn’t have my degree.”

A native of Beaver Falls, Pa., Pagani always wanted to be a journalist. In high school, he visited Kent State after hearing about the university from an acquaintance.

“It was so high quality I couldn’t believe it,” he said. “Everything was state of the art. I immediately knew this is where I need to be. This is where I’ll get the best opportunity to be a journalist.”

Pagani gained journalism experience during his years at Kent State, including announcing and producing basketball and volleyball for ESPN and working as a producer for the KSU Live! program last summer.

As his final year at Kent State progresses, Pagani is doing what he loves – writing web copy, setting up interviews for the camera, fielding emails from politicians and assigning stories to reporters - as he finishes his degree.