Lamar R. Hylton, Ph.D., has always approached his work at Kent State University focusing first and foremost on students. His leadership and dedication to students have now contributed to him being promoted to senior vice president for student affairs.

"Given our overriding Students First philosophy and the centrality of issues regarding the health and well-being of our students, I have elevated the position of vice president for student affairs to a senior vice president, effective Sept. 1,” Kent State President Todd Diacon told the university community in an email announcement. “This action recognizes the vital nature of this role that is core to our mission of graduating students, as well as the outstanding leadership of Lamar R. Hylton, Ph.D., who always leads with a student-focused approach. He provides invaluable insights to our discussions and offers strong leadership to a large portfolio of key services assisting our students.” 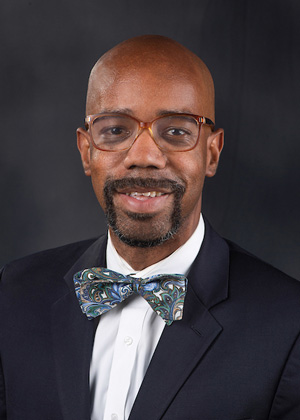 Hylton is personally invested in giving back to students. He works toward impacting academic achievement, college satisfaction and student success. He has served in a variety of different roles in fraternity and sorority life, residence life, student conduct, student activities, commuter student programs, leadership development and multicultural affairs.

He has served as a speaker at student affairs conferences and has received many recognitions and honors. In 2020, he was appointed to the executive committee of the APLU (Association of Public and Land-grant Universities) Council on Student Affairs. Hylton began his three-year term at the conclusion of the 2020 Fall Business Meeting and will continue to serve on the executive committee through the 2023 Fall Business Meeting.

A native of Columbus, Ohio, and now a resident of Kent, Ohio, Hylton received a Bachelor of Arts in vocal music-performance from Morgan State University, a Master of Education in college student personnel from Ohio University and a Ph.D. in higher education administration from Morgan State.