The Kent State University football team rolled to a 45-13 win over Delaware State University in its 2015 home opener on Saturday, Sept. 12, but one of the points scored by the Golden Flashes was a bit more special than the rest. 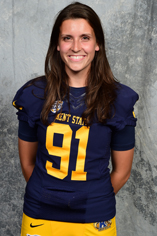 With 4:18 to play before halftime, fifth-year senior April Goss kicked an extra point to extend the Golden Flashes lead to 29-6 and become just the second woman to score in a major college football game.

“I knew this was a possibility tonight,” said Goss, who played high school soccer at Hopewell High School in Pennsylvania, but always dreamed of kicking for a Division I college football team. “I’ve been waiting for this moment for an awfully long time. I felt like I blacked out a little bit when I kicked it. It wasn’t the cleanest hit … but it went through, and that’s all that matters.”

Goss was mobbed by her teammates after her kick cleared the crossbar just inside the right upright behind Dix Stadium’s south end zone. They then carried Goss on their shoulders to the sidelines where she was greeted with hugs from Kent State’s coaching staff and congratulated by Kent State President Beverly Warren.

Earlier in the week, Kent State head football coach Paul Haynes confirmed to a reporter that he would get Goss, a native of Aliquippa, Pennsylvania, into a game at some point this season.

“April deserved it,” Haynes said. “She is the first player out there every day at practice and the last one to leave. She didn’t get this because she is a female. It’s because she has worked hard. Everyone on the sideline was excited for her.”

Goss’ kick was just one moment in a night filled with Golden Flashes highlights. What Haynes called “a fearless attitude that we want to see all season long” led to Kent State scoring through the air, on the ground, with two-point conversions, blocked punts and fumble recoveries.

“It was good to get back on the winning ways,” said Haynes, whose team improved to 1-1. “A lot of good things happened tonight. We talked about controlling the line of scrimmage, and our (defense) did that. There were a bunch of great performances out there.”

Kent State broke onto the scoreboard with 8:20 to play in the first quarter on a Colin Reardon-to-Antwan Dixon touchdown pass of 20 yards. Dixon’s score was the first of his career, and it arrived on his debut drive in a Kent State uniform.

Reardon added two more touchdown throws on an 11-for-16, 142-yard night that was interception-free. He hit running back Nick Holley for an 18-yard score just before halftime, then opened the third quarter by finding Holley again on a 4-yard touchdown.

Trayion Durham and backup quarterback George Bollas added touchdown runs of 1 and 5 yards, respectively, in the second quarter. Bollas also converted a pair of two-point conversions in the first quarter, hitting Brice Fackler for after the opening score, then rumbling into the end zone himself after Kent State’ second touchdown.

Defense and special teams also got into the act for the Golden Flashes as Nate Terhune recovered a fumbled snap in the end zone in the first quarter, and Ryan Seibert blocked a punt out of the end zone for a third-quarter safety. Terhune set up another score with a 44-yard run on a fake punt before the half.

The Golden Flashes outgained the Hornets 492-to-(-33) while picking up 25 first downs to Delaware State’s 1.

The fewest total yards allowed by a Kent State defense prior to this game was 81 against Marshall University in 1967.

“It was a good night, and we will be able to watch film and see a lot of good things,” Haynes said. “But there were also a lot of things we have to clean up. We had 12 penalties (for 114 yards) after 11 last week when we lost at Illinois. That’s something we have to work on. A win is a win, though, and now we are on to preparing for Minnesota.”

The Golden Flashes play at the University of Minnesota on Sept. 19 before returning home to face Marshall at 3:30 p.m. on Sept. 26.