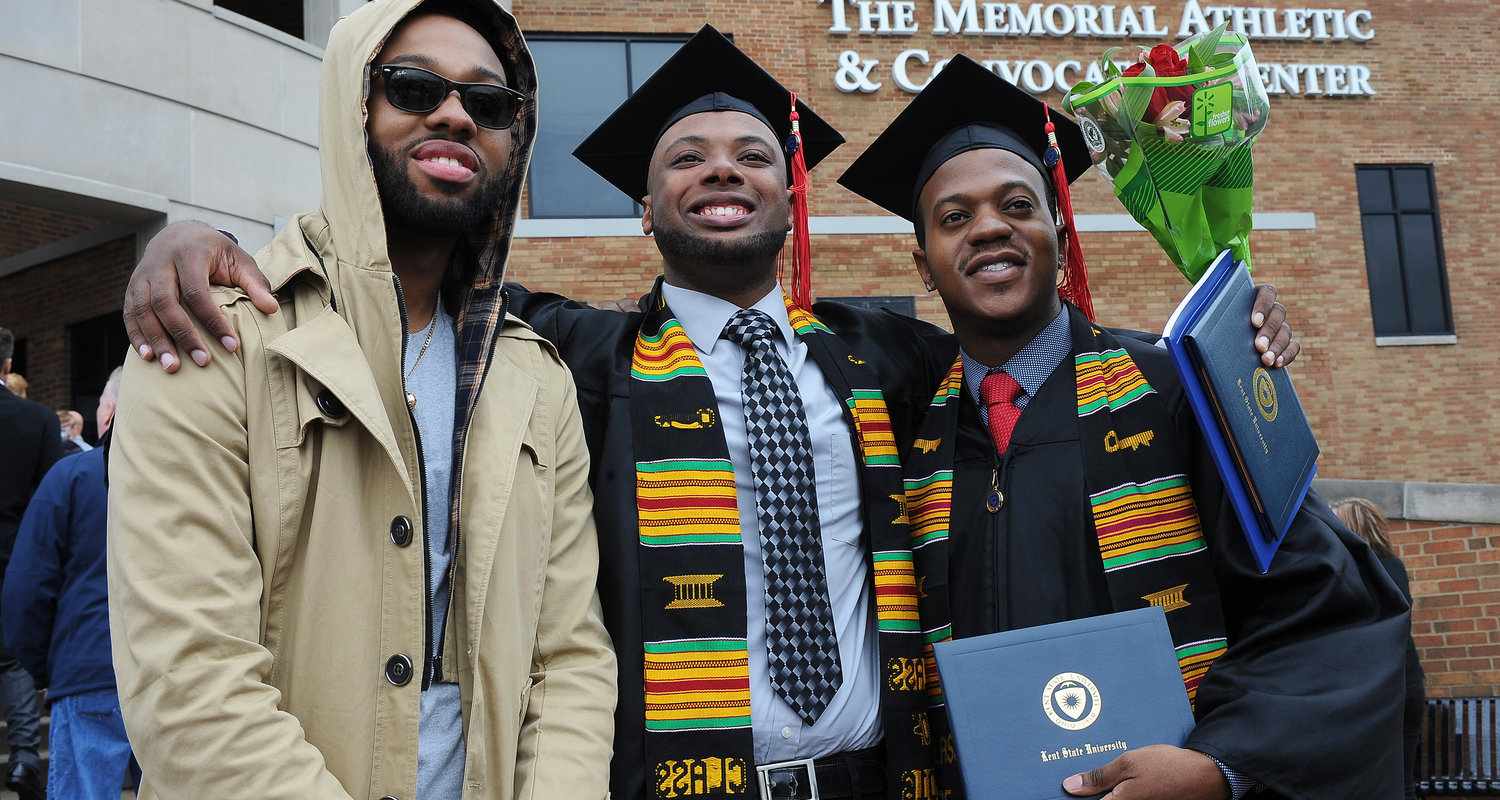 A master’s degree recipient crosses the stage and displays his Kent State diploma to his family during a Spring 2016 Commencement ceremony in the MAC Center. 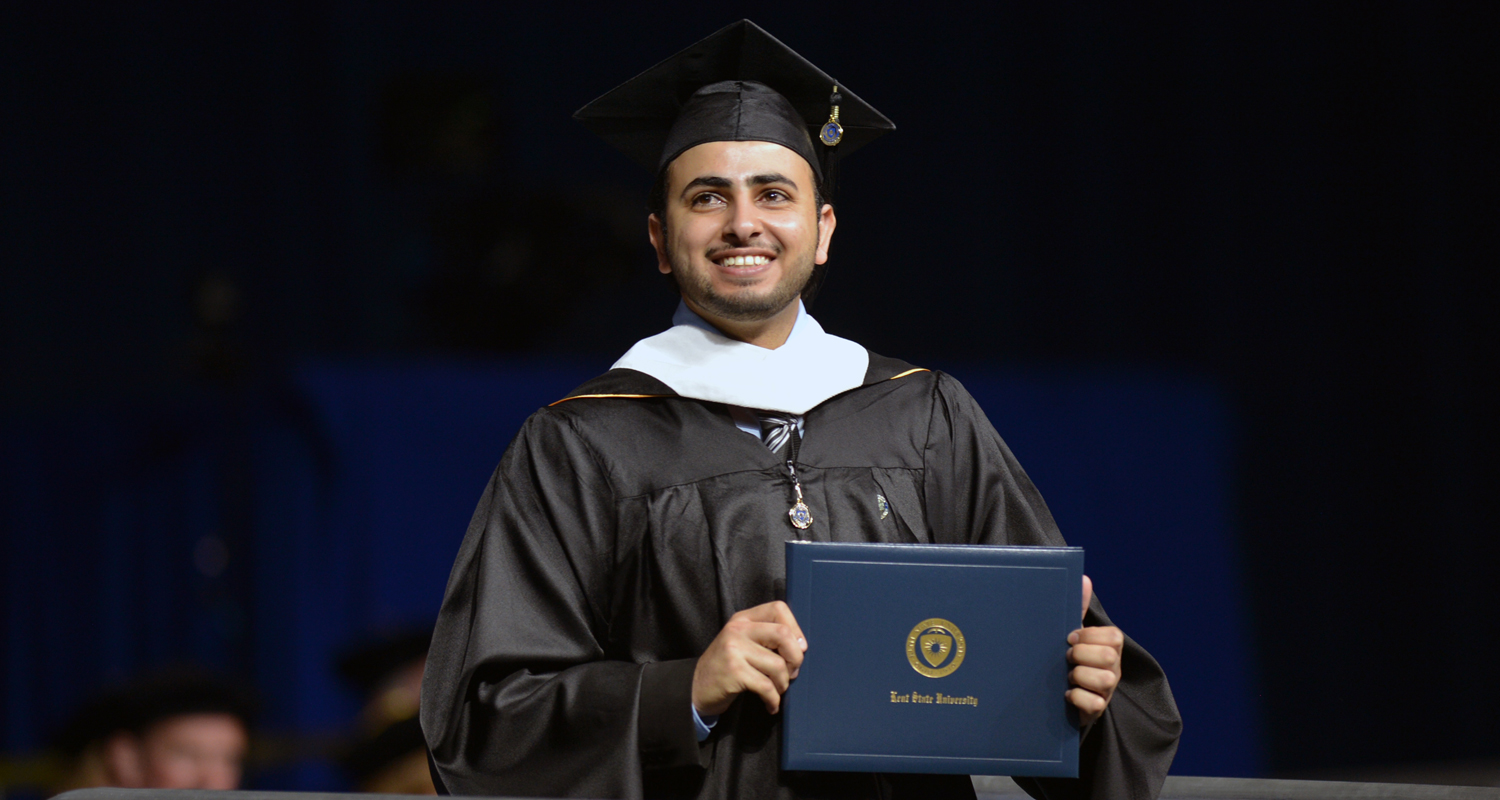 A recipient of an MBA celebrates in the MAC Center Annex while students line up prior the start of a Commencement ceremony. 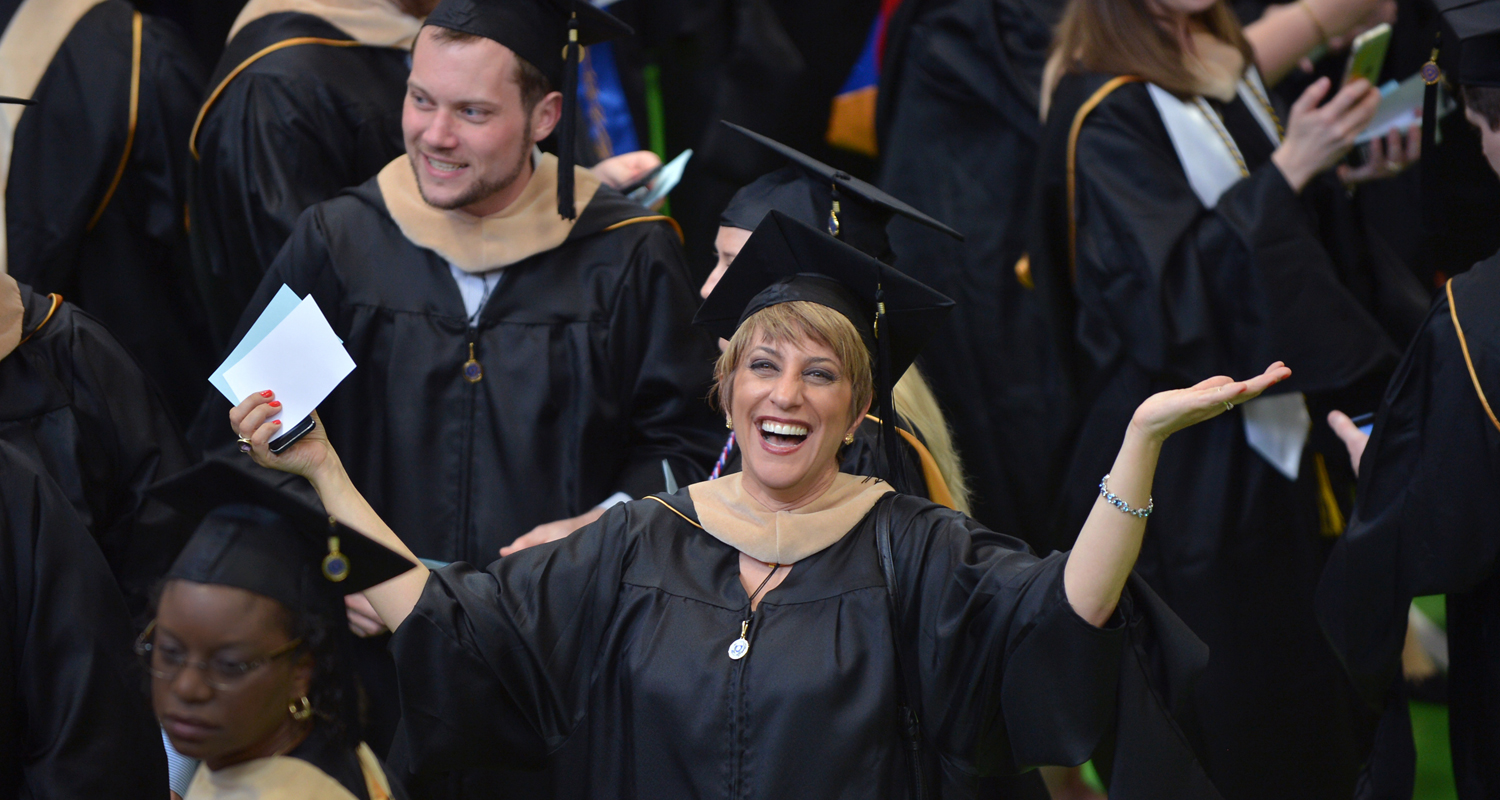 A new Kent State graduate is all smiles after receiving her diploma during a Spring 2016 Commencement ceremony in the MAC Center. 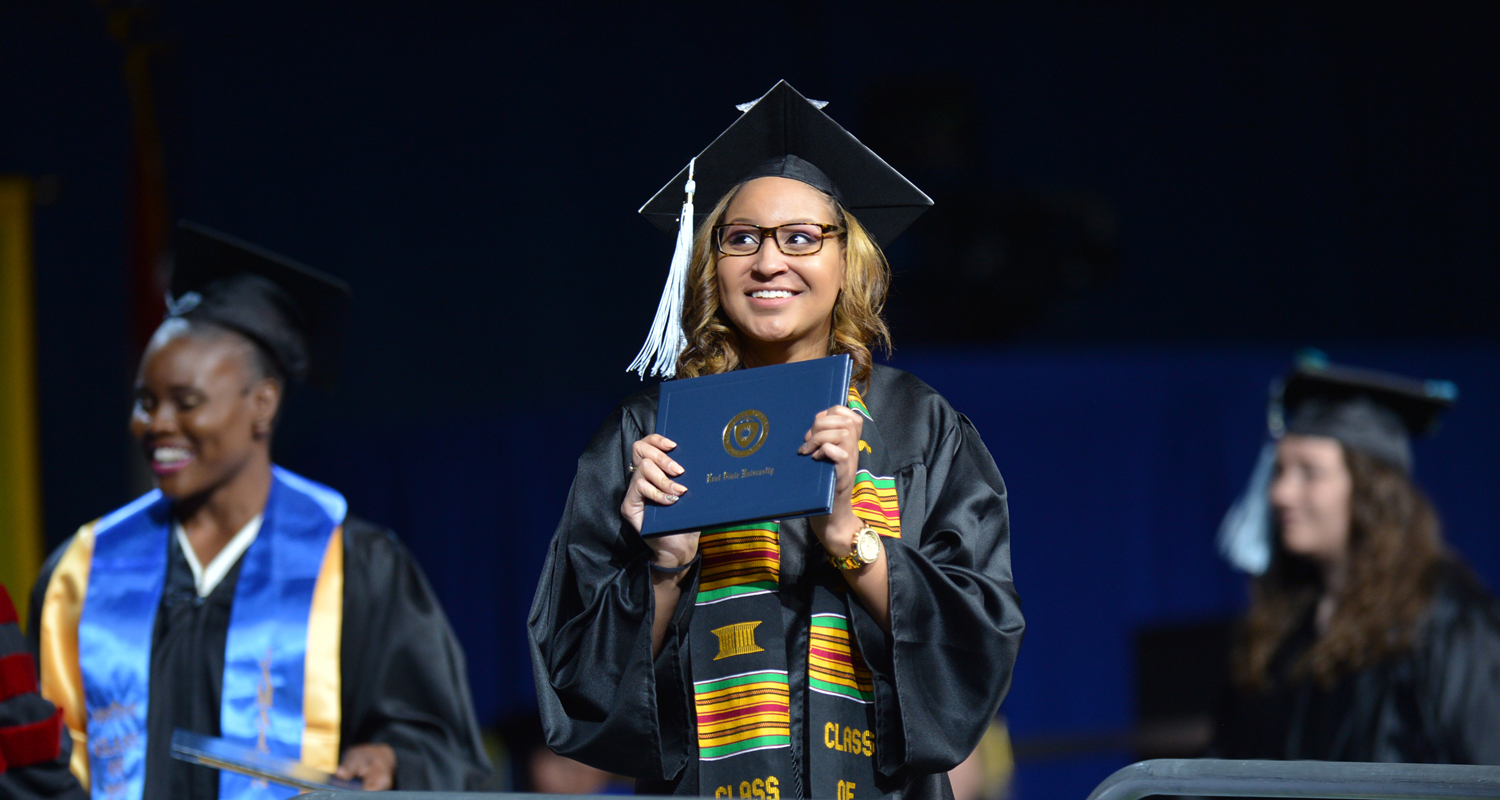 A doctoral candidate is hooded by his advisors during a Spring 2016 Commencement ceremony in the MAC Center. 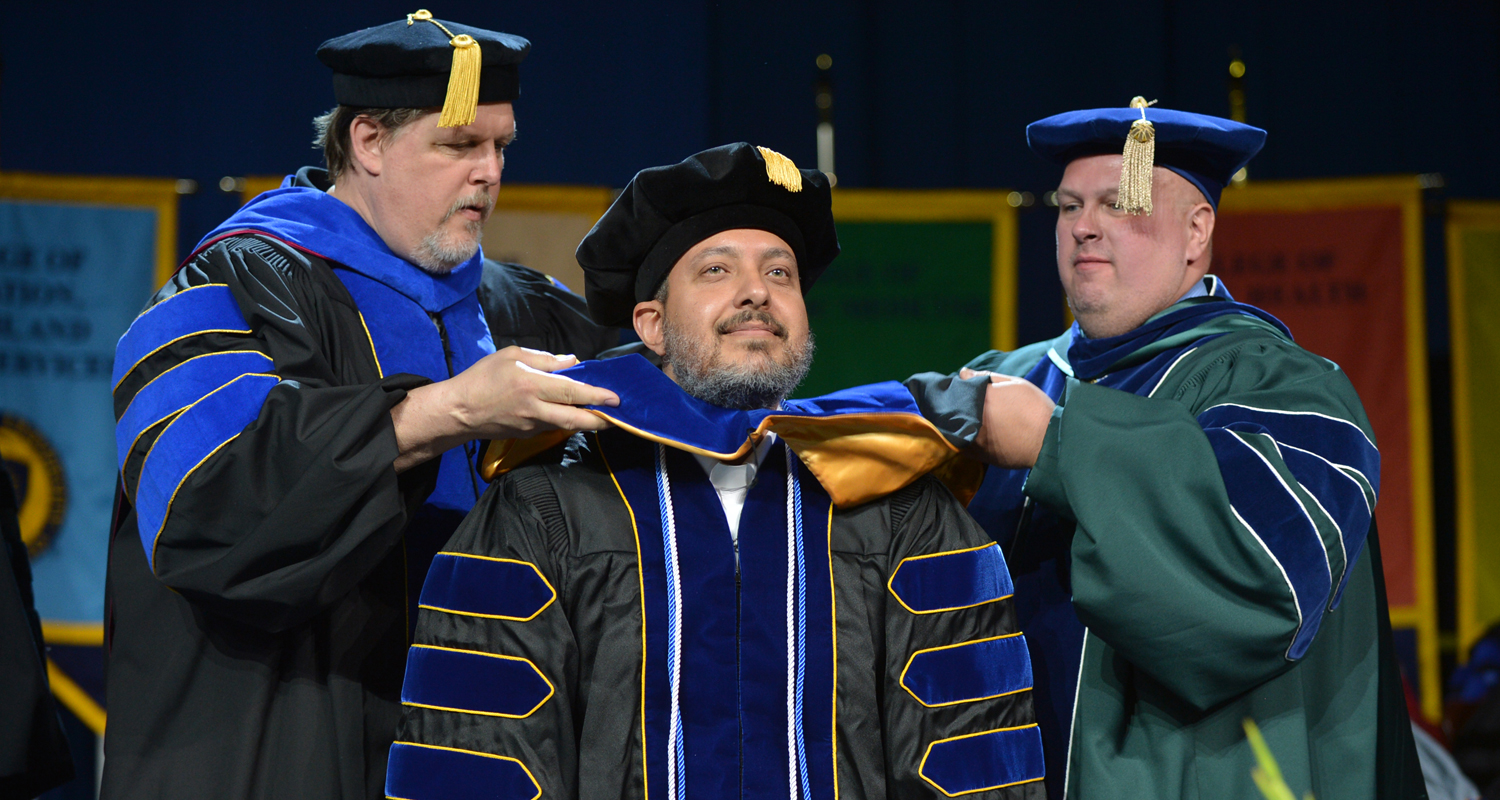 Friends take time for a selfie in the MAC Center Annex prior to the start of their Commencement ceremony. 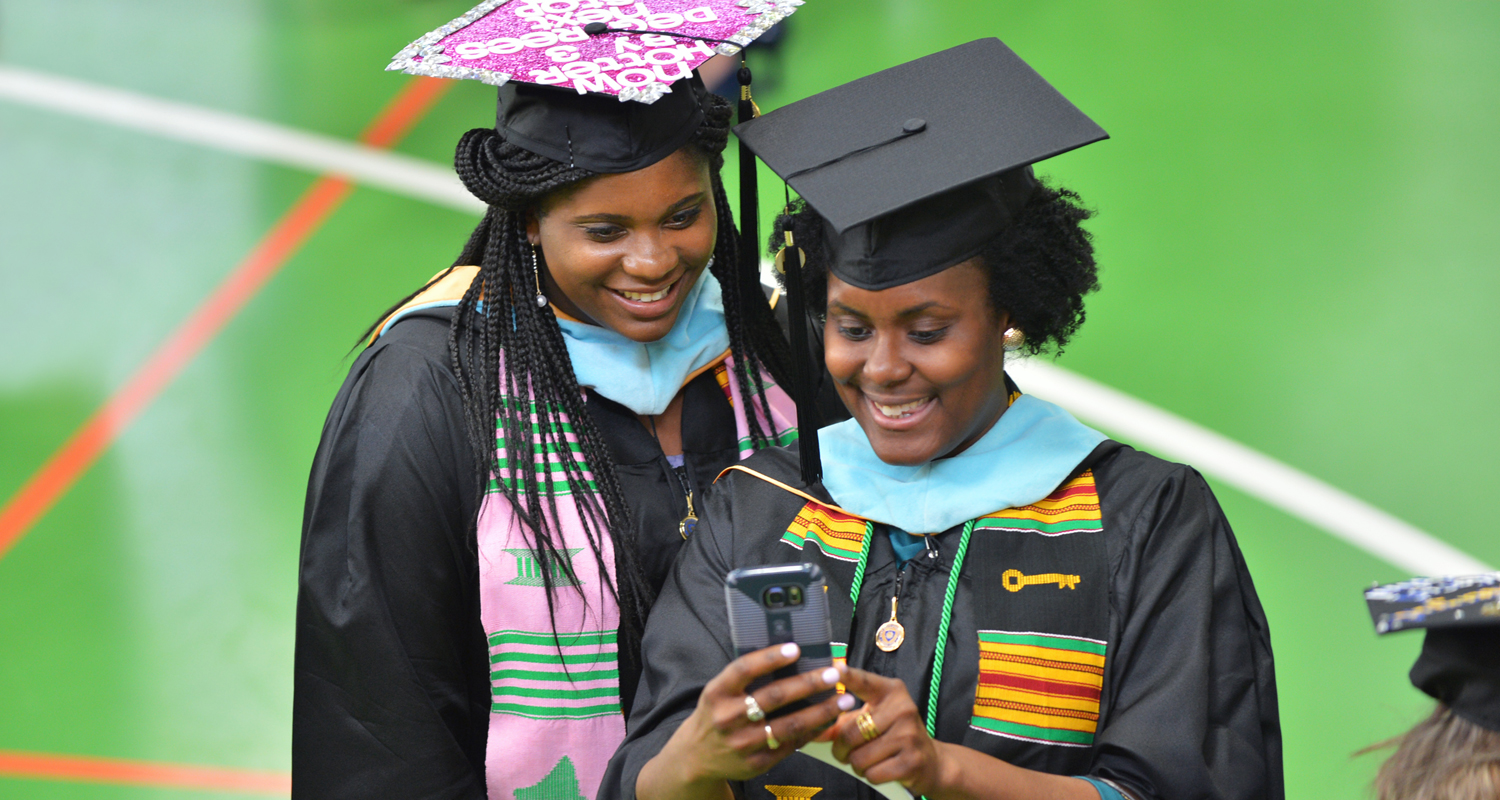 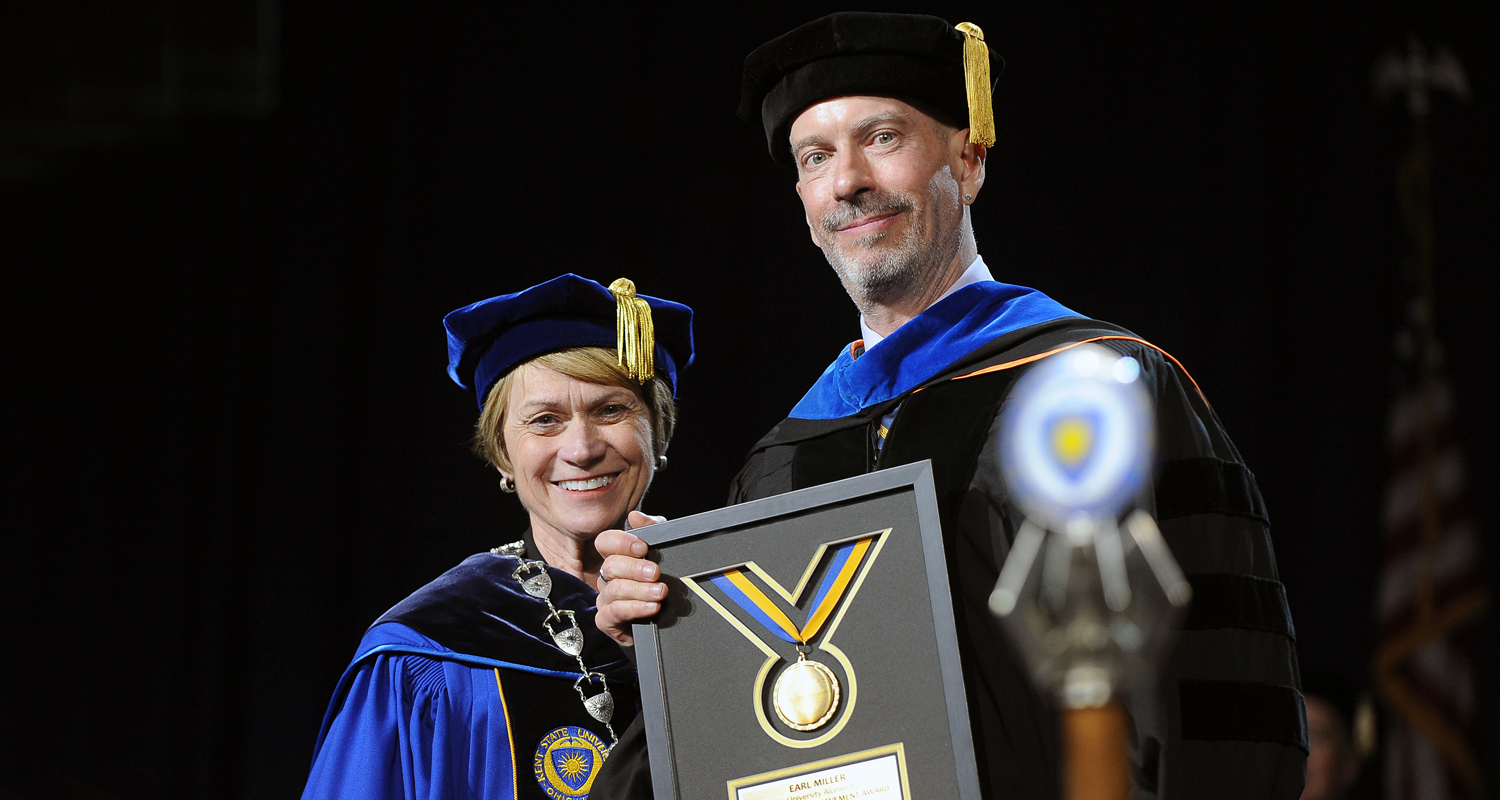 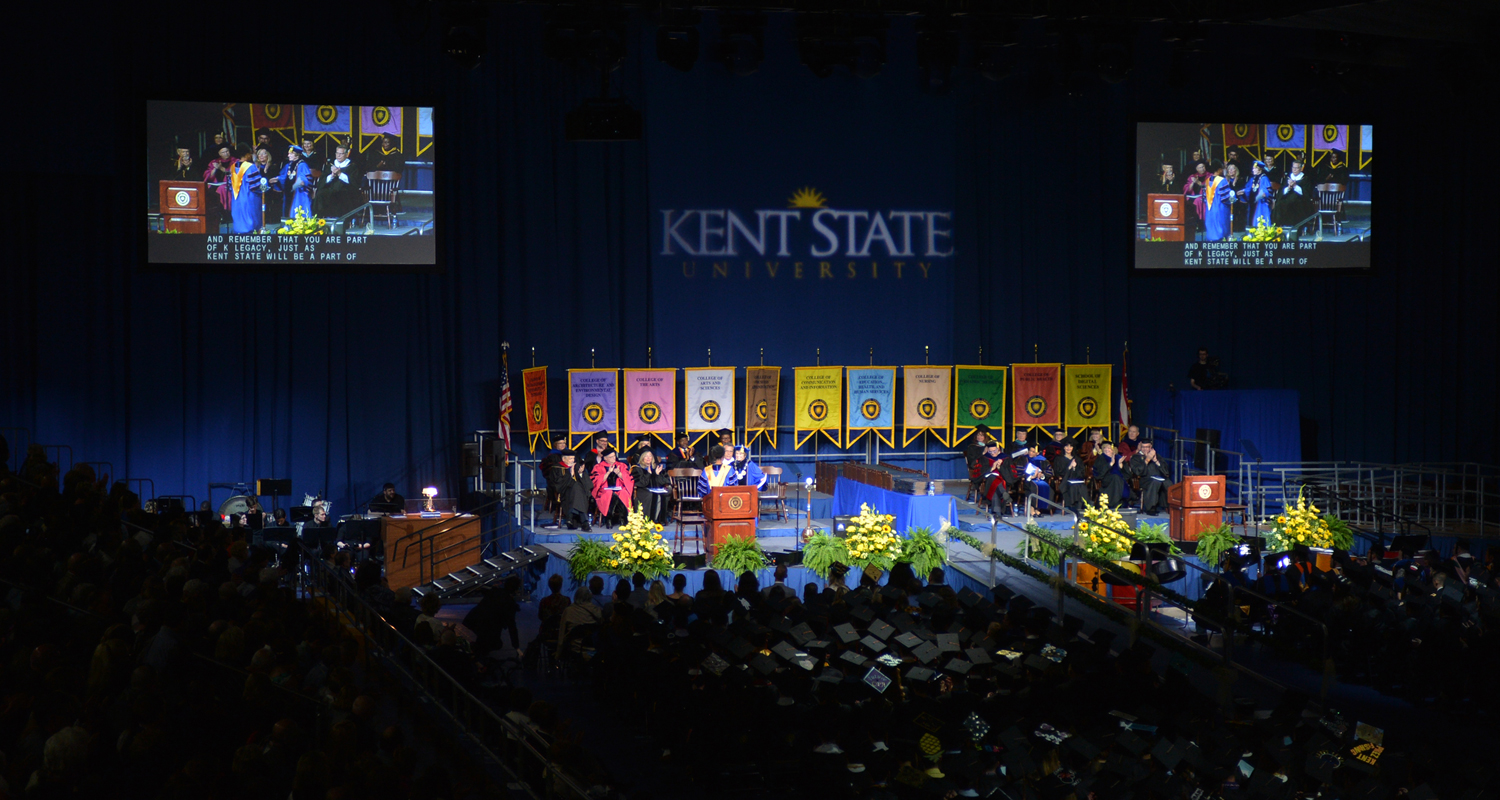 A Kent State student displays a creative mortar board while waiting for her Commencement ceremony to begin. 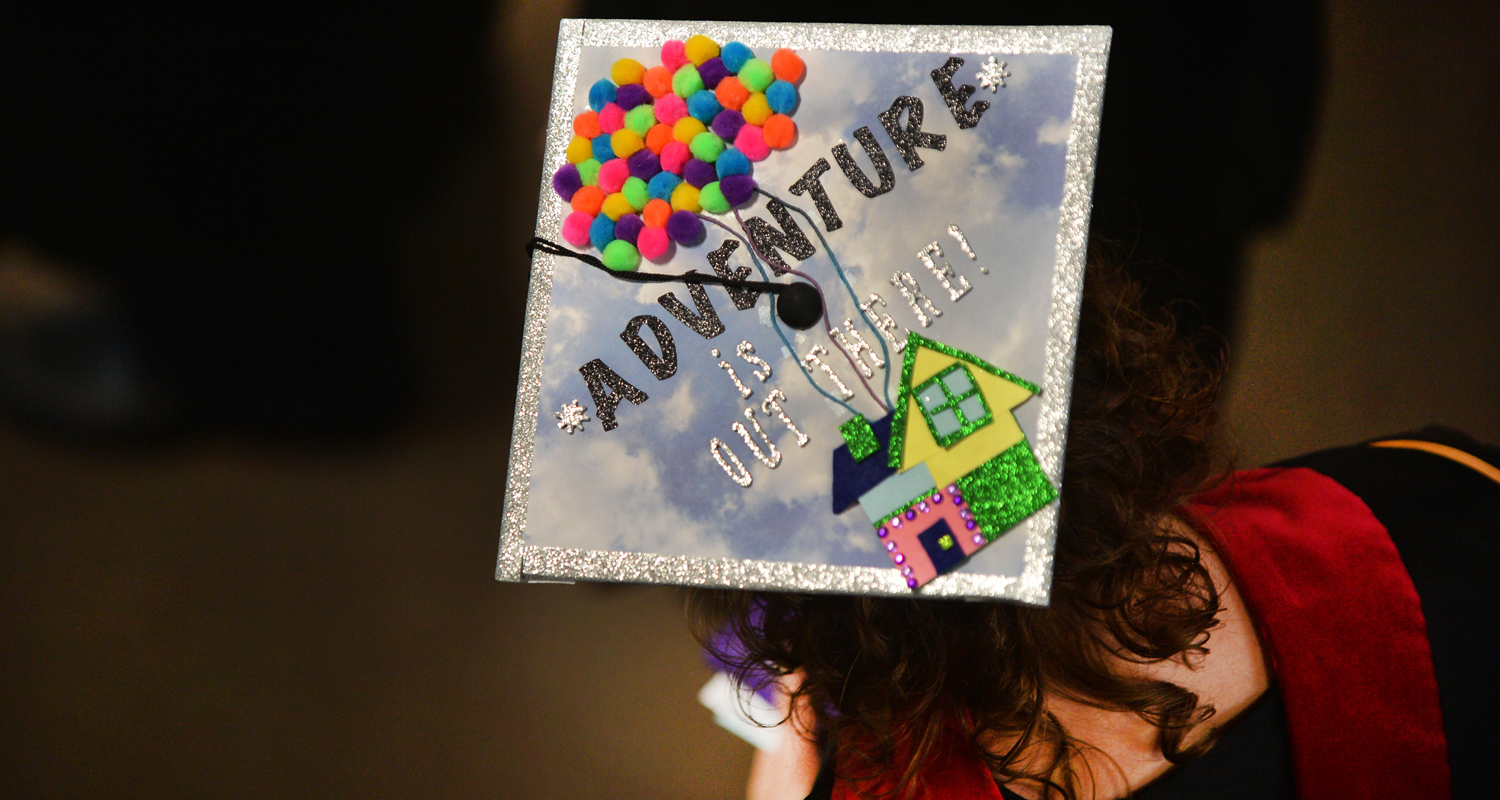 Kent State University held its Spring 2016 Commencement ceremonies for the Kent Campus on Friday, May 13, and Saturday, May 14, at the Memorial Athletic and Convocation (MAC) Center. The final ceremony will be held Friday, May 20, at Cartwright Hall. Kent State will confer 4,210 degrees, including 3,067 bachelor’s degrees, 968 master’s degrees, 169 doctoral degrees and six educational specialist degrees.

The 6 p.m. ceremony on Friday, May 13, recognized graduates receiving their master’s, doctoral and educational specialist degrees. The speaker for this ceremony was Kent State alumnus Dario D. D. DiMare, president of Dario Designs Inc. DiMare is an award-winning architect who has designed media projects all over the world and has been published in countless professional journals. As founder and president of Dario Designs in Northborough, Massachusetts, DiMare is responsible for the supervision, coordination and implementation of programming, preliminary design and architectural activities. His creativity and passion for efficiency has been credited with saving companies millions of dollars annually in operating expenses.

DiMare has worked on more than 300 media projects varying in size from under 10,000 to more than eight million in circulation. He also has designed for the largest media companies in the United States, as well as some of the largest in China, India, South America, Central America and the Caribbean. DiMare has been published more than 50 times and has had numerous articles written about his company and his work. He is the recipient of ING’s Ozzie Newspaper Award. His company, Dario Designs, is ranked by Beldon Research as the world’s best newspaper and media designer/consultant. Prior to forming Dario Designs, DiMare won a competition to design the eastern district headquarters for his employer, the Austin Company, a design-build firm with more than 2,000 employees. More recently, he was responsible for master planning a $4 billion, 30-million-square-foot resort in South Vietnam.

The 1:30 p.m. ceremony on Saturday, May 14, recognized graduates receiving baccalaureate degrees from the College of Applied Engineering, Sustainability and Technology; College of Business Administration; and College of Communication and Information. The speaker for this ceremony was V. James DeVincentis, better known as Jim or Jimmy D, owner and managing partner of Pittsburgh-based Przyborski Production Inc., a commercial content production company that focuses primarily on television commercials. DeVincentis earned his Bachelor of Science degree cum laude in 1975 from Kent State with a telecommunications degree in the College of Fine and Professional Arts. After an All-American high school swimming career, he was awarded an athletic scholarship to join Kent State’s swim team. During his tenure, the team went on to win three Mid-American Conference (MAC) titles in 1972, 1973 and 1974. During that time, DeVincentis won a total of 14 MAC titles — seven relay and seven individual. He set seven Kent State school records, seven MAC records and was voted MAC MVP. Additionally, he qualified for the NCAA National Championships all four years. Upon graduation, no swimmer had won more titles in the history of the MAC.

DeVincentis started his career as an account executive for Gateway Broadcasting, selling radio advertising. Since then, he has spent the past 30 years as managing partner at Przyborski Productions, overseeing projects that aired nationally for the likes of AT&T Wireless, Auto Zone and Church’s Chicken. On a regional level, they have produced for Giant Eagle, Allegheny Health Network, Highmark Blue Cross and S&T Bank. Przyborski Productions also owns two U.S. patents on high-definition camera technology, and it stays on the cutting edge of commercial content production with license agreements with SONY, Panasonic and Cannon. DeVincentis has stayed very involved with Kent State since graduation. In 1984, he was inducted into the Kent State Athletic Hall of Fame. He created the “Big Ann” Football Fund athletic endowment to honor his mom, and he currently sits on the National Athletic Development Council board at the university.

The 5:30 p.m. ceremony on Saturday, May 14, recognized graduates receiving baccalaureate degrees from the College of Arts and Sciences, College of Nursing, College of Public Health and the School of Digital Sciences. The speaker for this ceremony was Earl K. Miller, Ph.D., Picower Professor of Neuroscience at the Massachusetts Institute of Technology (MIT). He received his Bachelor of Arts in psychology from Kent State in 1985 and his Ph.D. in psychology and neuroscience in 1990 from Princeton University. He has academic appointments in the Picower Institute for Learning and Memory and the Department of Brain and Cognitive Sciences at MIT.